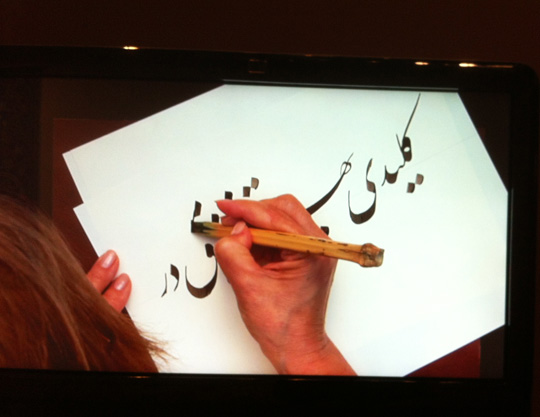 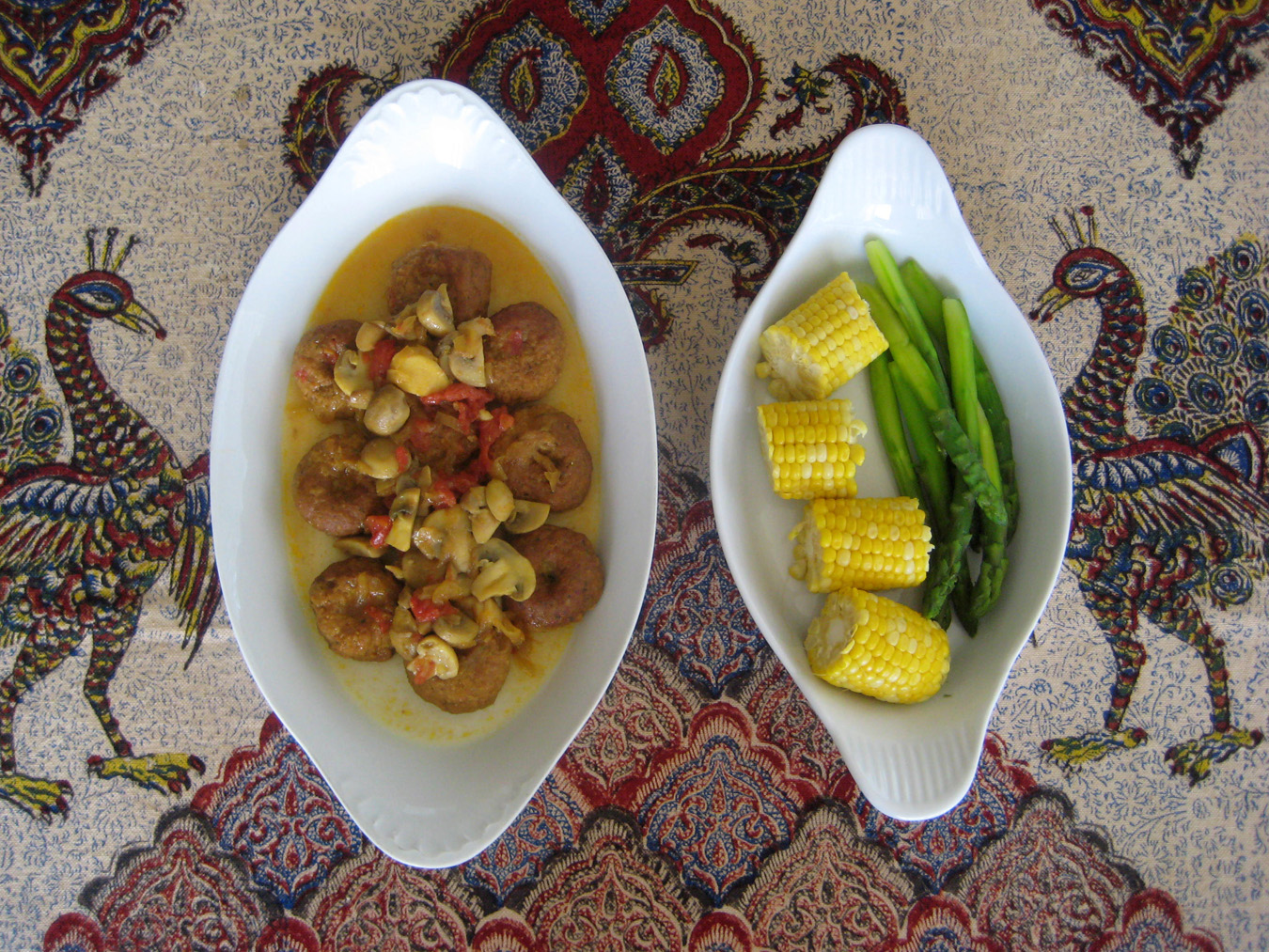 There’s a saying in Farsi when someone goes to visit someone and doesn’t leave that they have eaten kangar (cardoon) and they have put down langar (anchor.)
What is kangar (cardoon)? Picture a celery with attitude and thorns! The Heatcliff of edible vegetables! Kangar is not found in the U.S., so I’ve certainly not had any, but, it appears that I’ve most certainly put down a langar here in the DC area while visiting my folks.


Now lest you think I’m just living it up here, sippin’ sharbat and eating ta’dig and reading Persian fairy tales, let me say: I wish! And: yay and nay! That is, this is a working holiday but I’m trying to have as a cozy a time as possible nevertheless and to soak up the good vibes of being near those who are darling and dear.
I’ve been cooking up a good bit while here too, and the other day decided to make one of the earliest recipes I learned from Maman, a type of koofteh (Persian meatball), to write as a post to feed the blog monster. (Remember: blog monsters are always hungry!) So I made the koofteh and its yummy mushroom sauce and then took the standard operating procedure food-blogging photos (on a Persian tablecloth with a traditional Persian motif called ‘galamkar‘) and was quite pleased with myself and life and feeling somewhat accomplished when … I realized I’d already posted this Persian koofteh recipe  last year! Insert here a big: D’OH!
What is a food blogger in want of a quick blog post to do? Why: show pictures! Lots and lots of pictures! (As for the been-there-done-that koofteh: it is delicious; goes super nicely with bread and yogurt; leftovers taste even better the next day; and for the recipe please go here.)
And now begins the show and tell ‘Persian culture’ portion of our visit.
I’m usually super lazy when visiting my family and pretty much camp at home, but, I did motivate and trekked to the Smithsonian one fine sunny day. (Love, love the Smithsonian! Giving a good name to “institutions” everywhere!) 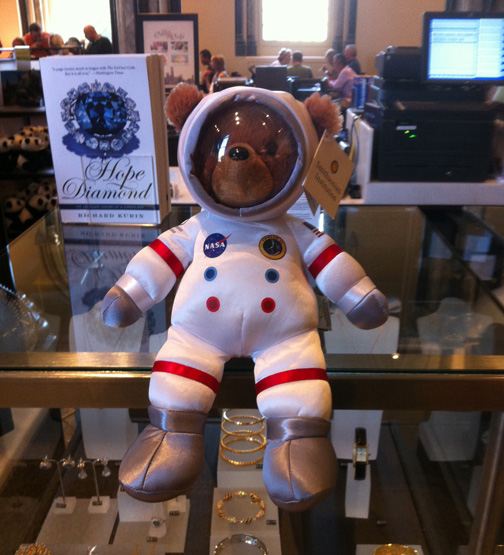 In the Smithsonian Castle I spent some time with this cute and cuddly astronaut! 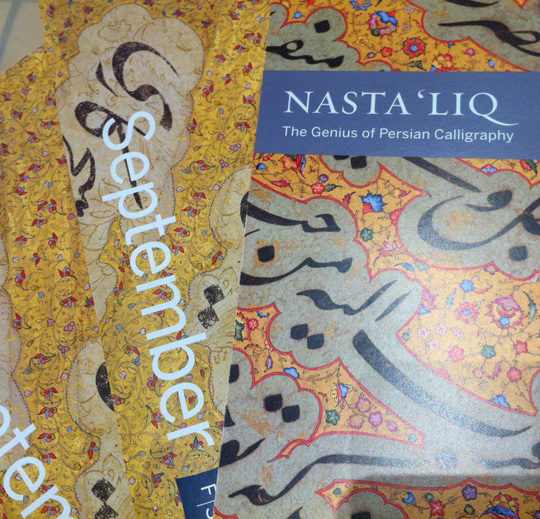 Then I made my way through a beautiful garden to go check out the Persian Calligraphy exhibit on view at the Freer Sackler Gallery of the Smithsonian. The gallery considers calligraphy to be “Persian culture’s most expressive from of aesthetic refinement. (By the way, calligraphy means “beautiful writing”.)
A rather hypnotic video screen – a woman engaged in the practice of calligraphy – greets one at the entrance to the Nasta’liq – Genius of Persian Calligraphy exhibit. It is not a grand show, by the way and by any means, just one small room and anteroom, but the selection is interesting and at times exquisite. Worth a visit for sure.

There’s also a permanent exhibit of ancient Persian objects at the Freer Sackler Galery. I’ll share just a few images that may be of interest to you: 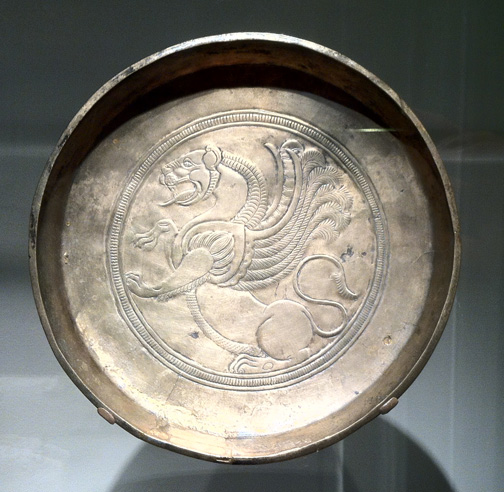 The imagery of winged lions (what the Smithsonian calls ‘the fantastic feline’) as seen engraved on this plate is a frequent motif in the design of ancient Persian art. 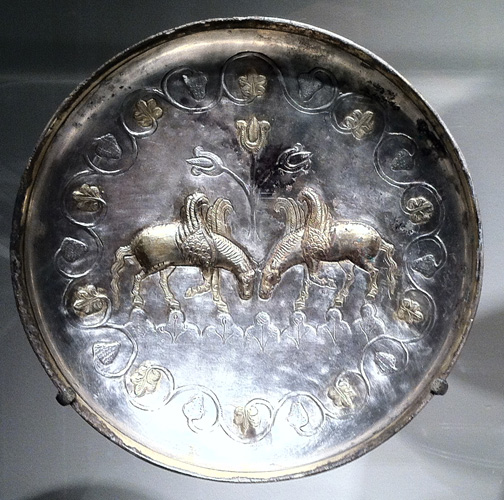 “Winged horses appear frequently in Sassanian art, but their exact significance has yet to be determined. On this symmertrically organized plate, a pair balances on a stylized crenellated ground as if grazing or drinking. The familiar Sasanian (a Persian dynasty) vine scroll encircles the plate’s inner rim. Similar winged horses have been interpreted as a Zoroastrian astronomical sign or a representation of Pegasus, the mythical horse that was introduced to the Sasanian world through the Romans.”  The Smithsonian’s Museums of Asian Art 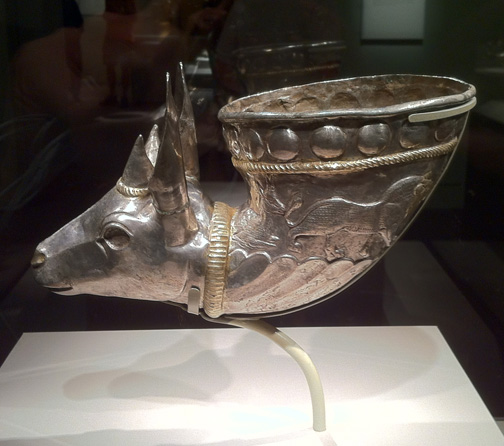 “Among the most remarkable Parthian ceremonial objects are wine horns, originally known in Persian as palogh and later as shakh (horn).  Wine horns may have been included in special royal ceremonies, such as the Persian New Year (Nowruz) marking the vernal equinox. The tradition of creating elaborate wine horns continued well into the Sasanian period, but few of the vessels have survived. This extraordinary example with a protome (forepart) in the shape of a gazelle is decorated with an unusual scene: a bull and a resting antelope flank one side of a tree, and a roaring lion and a second antelope appear on the other side. While the precise meaning of the imagery is unclear, the meticulous design and fine quality of the wine horn suggest it was created in a royal workshop.” The Smithsonian’s Museums of Asian Art

If you’re still with me, and I hope you are since the best is to come, I personally found this following exhibition text (re the tradition of feasting in ancient Iran) to be fascinating. Since the image is blurry and not entirely legible, here’s the transcript: 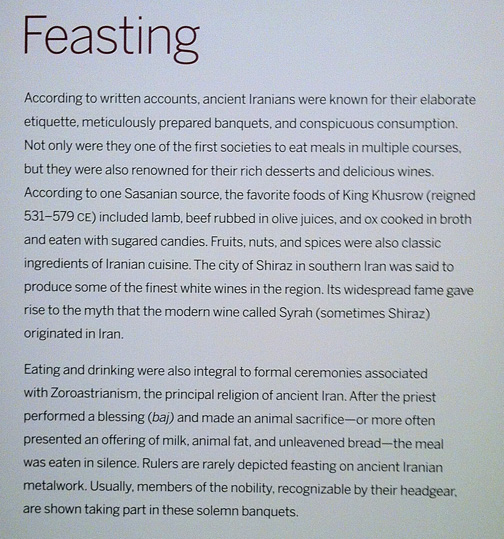 “According to written accounts, ancient Iranians were known for their elaborate etiquette, meticulously prepared banquets, and conspicuous consumption. Not only were they one of the first societies to eat meals in multiple courses, but they were also renowned for their rich desserts and delicious wines. According to one Sasanian source, the favorite foods of King Khsurow (reigned 531-579 CE) included lamb, beef rubbed in olive juices, and ox cooked in broth and eaten with sugared candies. Fruits, nuts, and spices were also classic ingredients of Iranian cuisine. Eating and drinking were also integral to formal ceremonies associated with Zoroastrianism, the principal religion of ancient Iran. The city of Shiraz in southern Iran was said to produce some of the finest white wines in the region. Its widespread fame gave rise to the myth that the modern wine called Syrah (sometimes Shiraz) originated in Iran.”  The Smithsonian’s Museums of Asian Art
At this point, if not out of consideration for wearing out your scrolling finger and patience, I was tempted to also include some of the photos I took of the gorgeous ancient Persian ruins of  ‘takht’e Jamshid‘ in Persepolis, Iran that are relevant to this post’s subjects. But: let’s just end here. Hope you enjoyed this disjointed but earnest Persian food and culture post about koofteh, calligraphy, kangar & langar in Washington DC brought to you by your faithful blogger who is currently basking in the pleasure of being at the bosom of family, but is also suffering from a nasty cold.

Khoda hafez until we meet next! 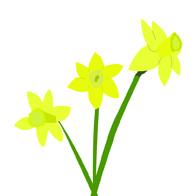 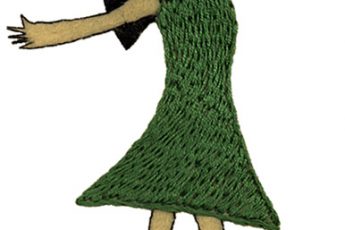 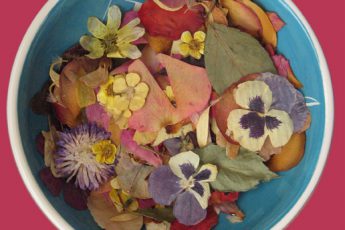