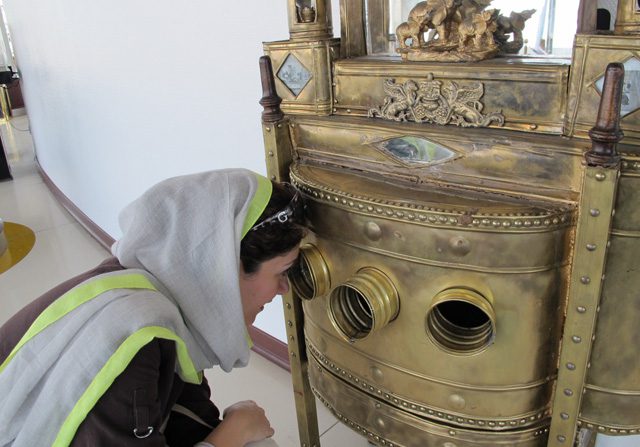 Banafsheh, who I like to call B, is a dear family friend, trilingual attorney, witty wordsmith, and (gratefully for me) avid shutter bug. All of the pictures in this post (unless specified otherwise) are hers that she shared with me. (Mer30 Banafsheh joon!) This first pic is of B peering into the viewfinder of a diorama — a 19th century mobile-theatre device invented in France — imported to and popularized in Iran by Mozafar od-din Shah, the then king of Iran, who came across its prototype in Paris.
This intriguing contraption of moving images — the cutting-edge technology of its time, offering the masses peeps at never-before-seen images of exotic people and lands — came to be branded as shahr ‘e farang, which literally means “City of Europe” but is more aptly (thanks to @arefadib) translated as “The Unseen World.” Anecdotal evidence has it that its entrepreneurial operators (who were called amoo shahreh farang) would set up shop on street corners and attract customers by sing-songing: “shahr, shareh farangeh; hameh chish khosh ab va rangeh …” which means: “the city is a European city, and everything there is colorful and beautiful …” People lined up.
Here’s what that early-adopter techie king looked like – photo via Wiki: 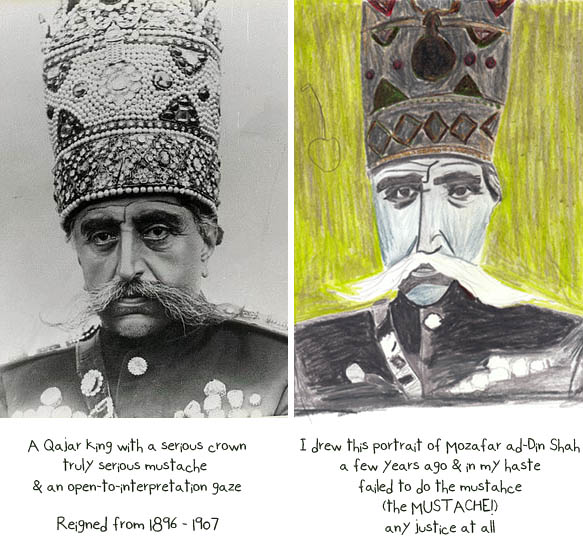 Now, this particular shahr ‘eh farang device that B can be seen charmingly peering into in the picture (above) is housed in a shiny, relatively new (circa 2007, I believe) public space in Tehran called Borj ‘eh Milad or Milad Tower.
Here are some pix of it: 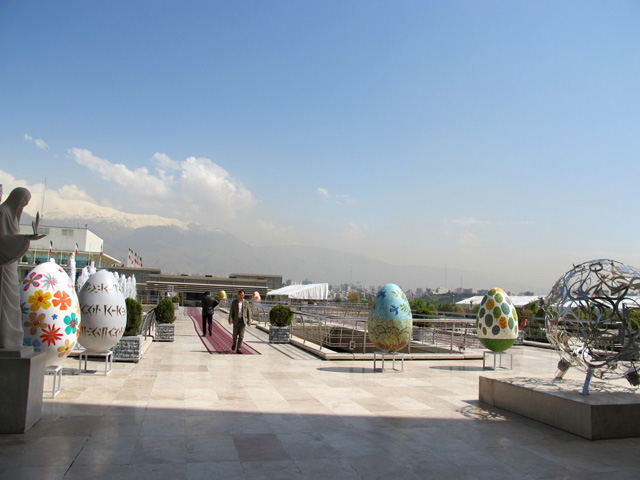 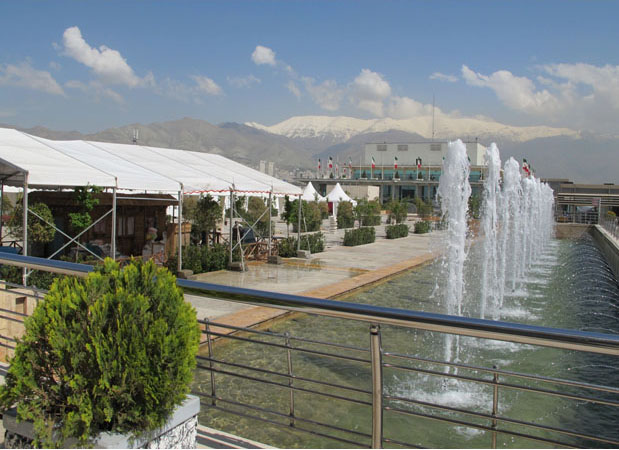 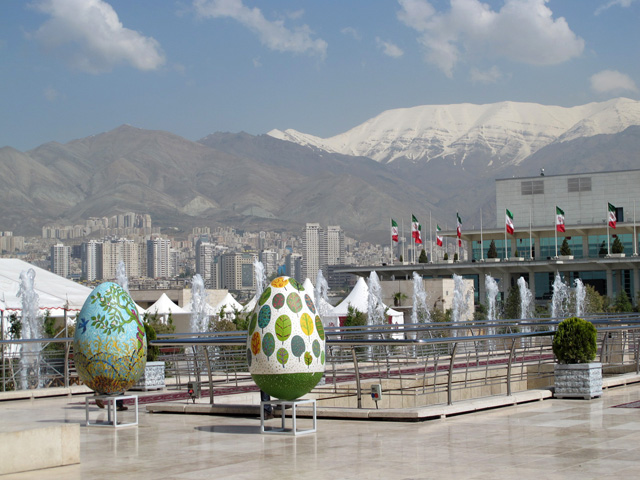 Milad Tower seems to be a rather impressive space –jayeh abroomandaneh as B calls it- thoughtfully and tastefully laid out. Apparently, it is a multi-purpose compound — an international convention & trade center with a hotel, restaurant, IT park, etc. — meant for both sightseeing and commerce.
And judging by the pictures, it looks like it’s situated high enough to offer a sweeping vista of Tehran. A vista guarded under the watchful gaze of the statue of Ferdosi, beloved iconic poet, “the Homer of Iran,” the savior of the Persian language: 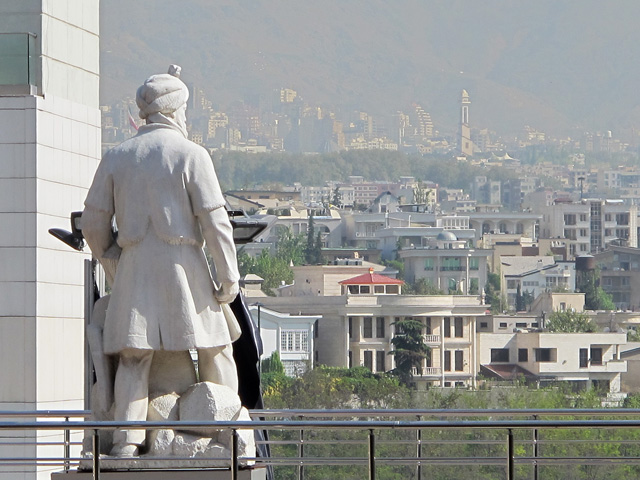 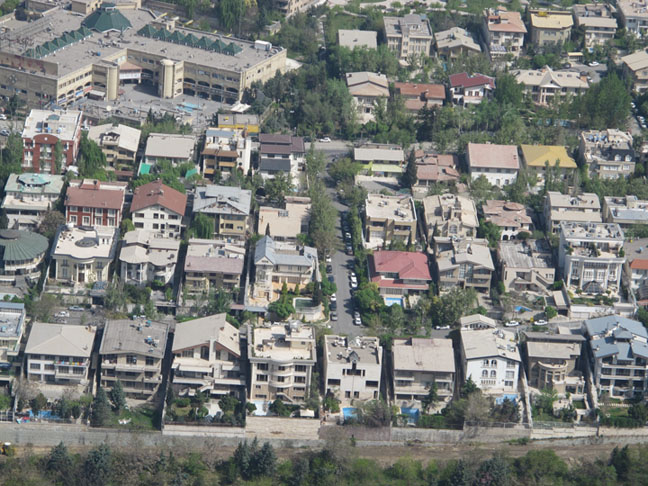 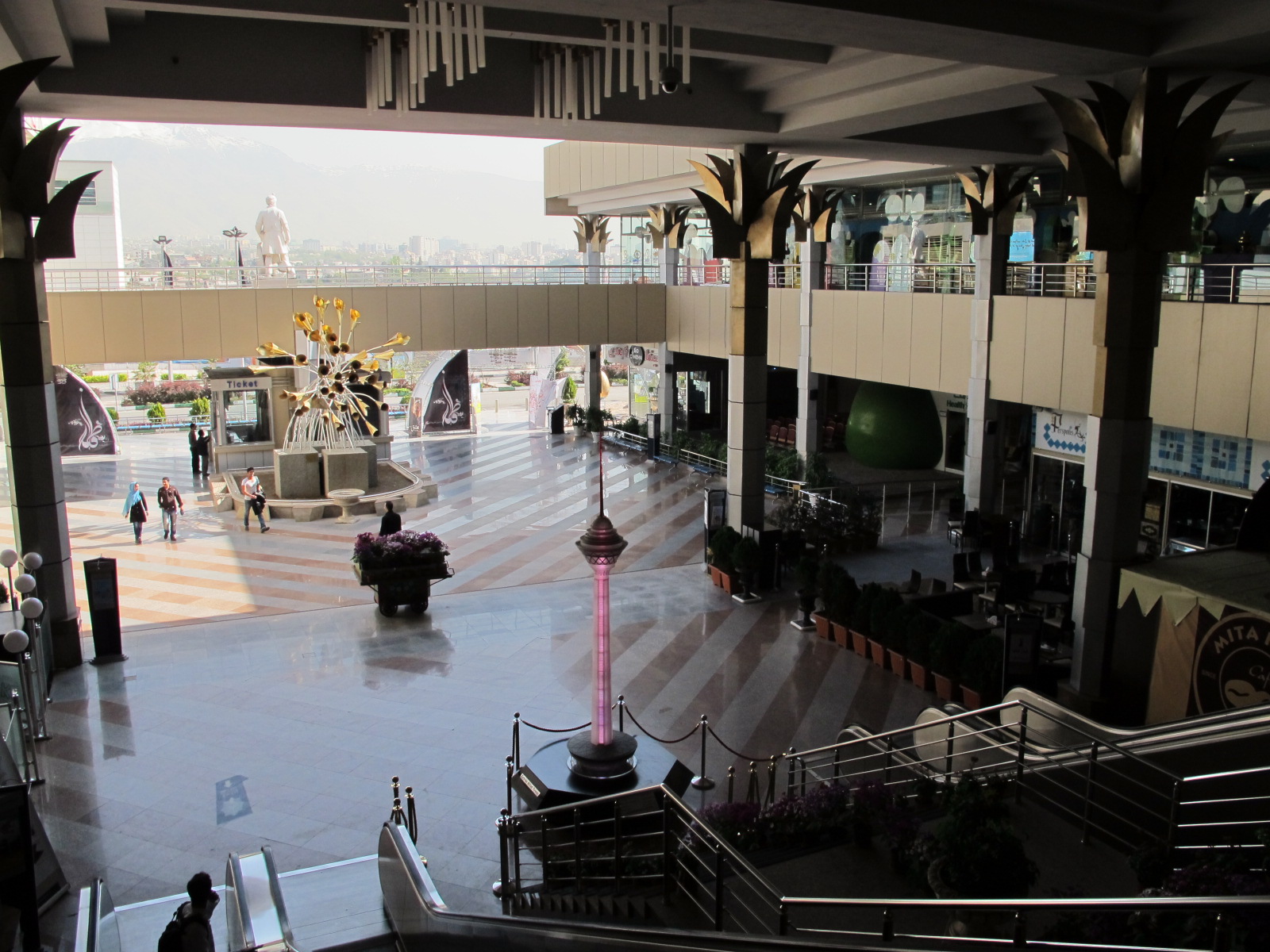 This place didn’t exist when I lived in Iran. Here I am, with the aid of a modern-day shahr ‘e farang, raptly peering at images of a distant homeland – at sights entirely new to me.
Looking at these pictures, I feel … I feel like Rip Van Winkle. And can I tell you something? … I’m homesick. HOMESICK. Is it alright for me to say that?
[If I was originally from almost any other country, I would not worry about being judged for this sentiment, and I would not ponder -as I have, at some length- about whether it is OK to express -expressly!- that I miss my home country. (I do. Deeply, profoundly.) But “Iran” is such a loaded word – with so many connotations, stereotypes, prejudices and mistrust. Some fair. Some unfair or uninformed. I almost always feel perched on or walking a tightrope up high, when talking about or hearing about Iran. This is not a carefree identity, but it is one that I care for fiercely. With uncompromising, legitimate pride. No fear or need of anyone’s permission for that. But that’s not the end of the story, because I’m a hyphenated person. The hyphen is the clasp knotting a necklace strung with seemingly incongruous beads – joining Iranian to American. Rumi to Walt Whitman. Not so incongruous, after all. The hyphen is a talisman. But a hyphenated identity is a mercurial one, its strength is its fluidity, fusion, and expansive comprehension; its flaw, the fact that it is learned not innate, and in the eyes of many, on either side of the hyphen, suspect. Maybe that’s why I’m a fan of Phillip Dick’s Blade Runner. I relate to the plight of the androids. But then again, I remember that there’s this globe, somehow balanced in the sky, in space, graced by the infinite mystery and majesty of the universe, and we’re all on it, and we’re all … just the same.]
On a less wordy more fun note, let’s end the tour of the tower with a tower of ice cream. I mean … WHOA! 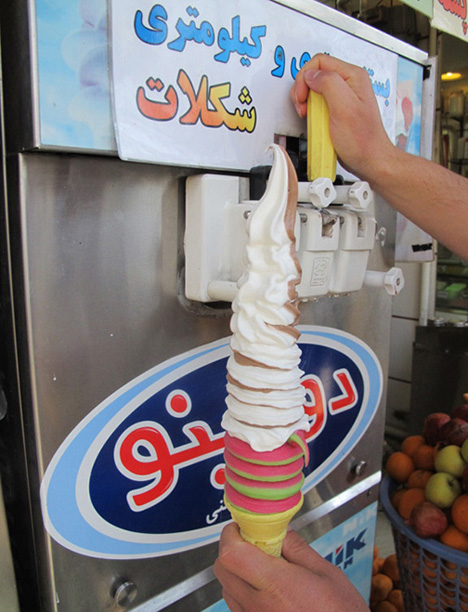 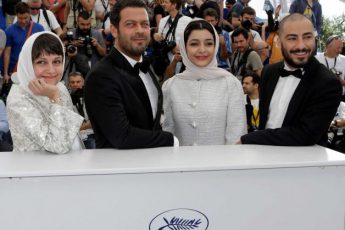 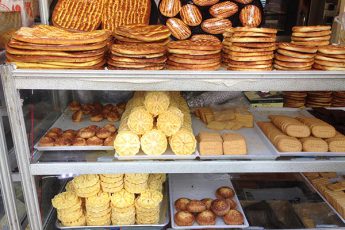