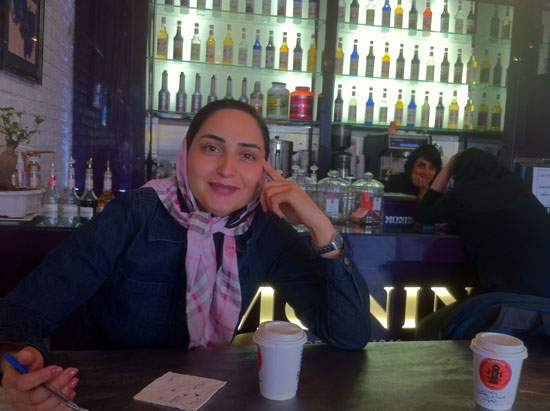 The other day I met my friend Maryam at a cute cafe right around Tajrish Square (meidaneh Tajrish) which is a neighborhood in the far north of Tehran at the foothills of the Alborz mountains. 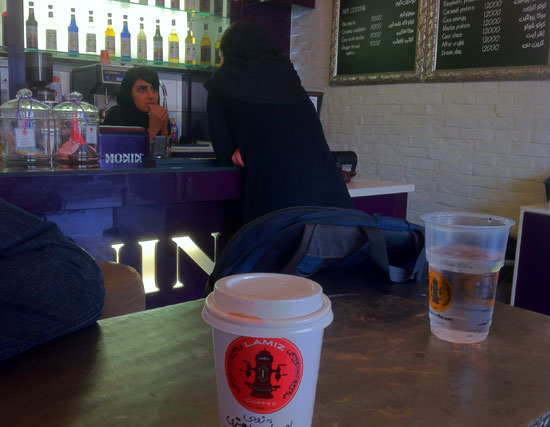 We had coffee and plotted our potential adventures … 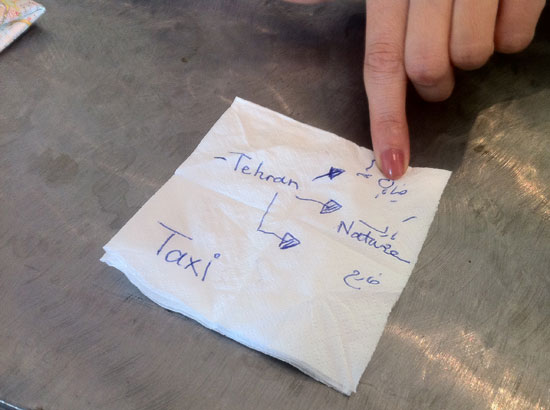 ,,, and Maryam charted our expedition options! 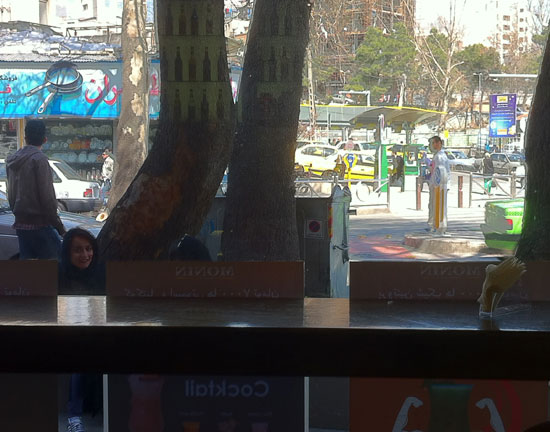 There were people hanging out outside the cafe, but inside, we had the place entirely to ourselves. Maryam told me this was only due to the Norooz (Persian New Year) holiday flux and that ordinarily there is a long line of thirsty Tehranis in a line spilling out into the street with no place to sit and hangout. 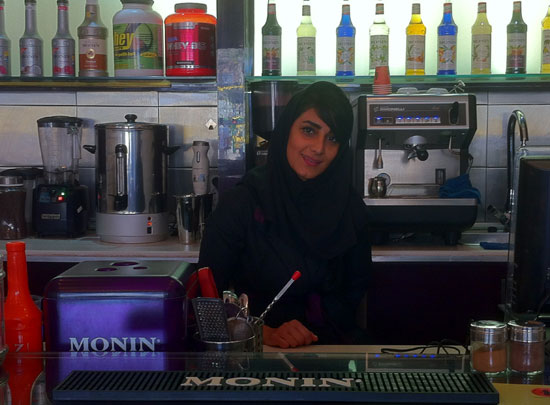 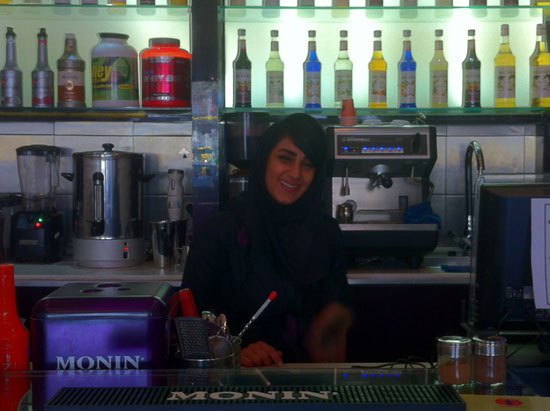 This lovely Iranian barista, whose name is Raha, confirmed that the cafe is ordinarily hopping and so busy that they have a 20 minute maximum hanging out/lingering policy. 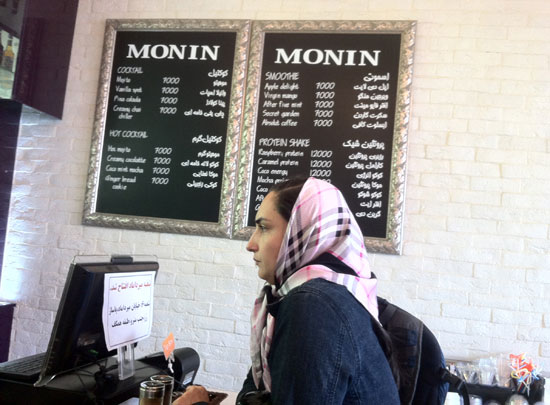 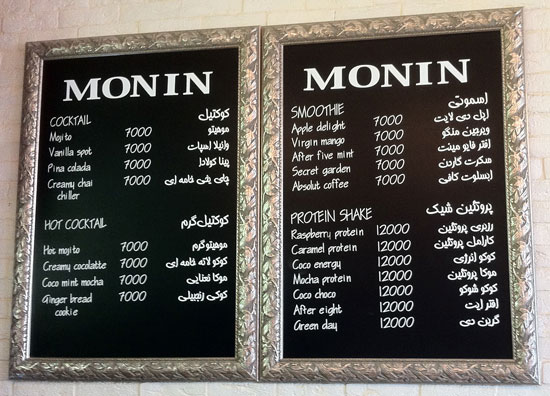 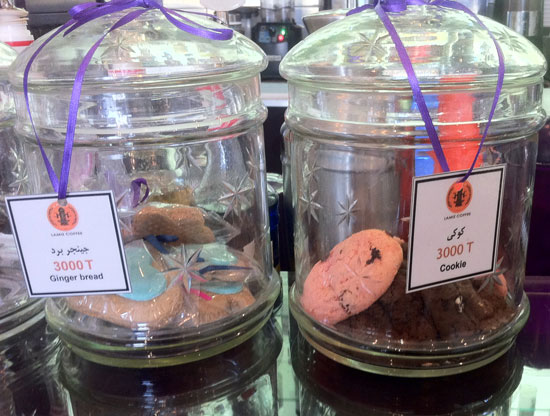 As we took our leave, I snapped a few pix for your entertainment and amusement. Re the menu: I’m assuming the “cocktails” are virgin ones as alcohol is not permitted in Iran. People do imbibe. But not officially. Cough cough.
We then gingerly strolled to and through the old bazaar of Tajrish where you can find practically everything. 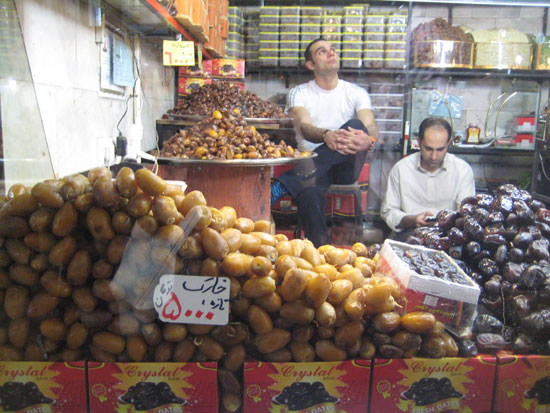 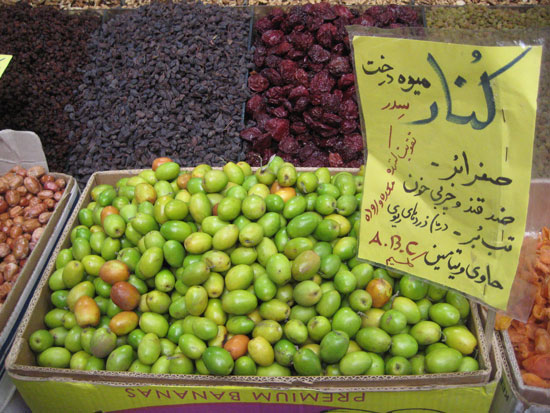 … to Konar, the fruit of the ceder tree, new to me, but apparently quite popular to eat in the southern regions of Iran, that tastes something like a combination of apples and pears … 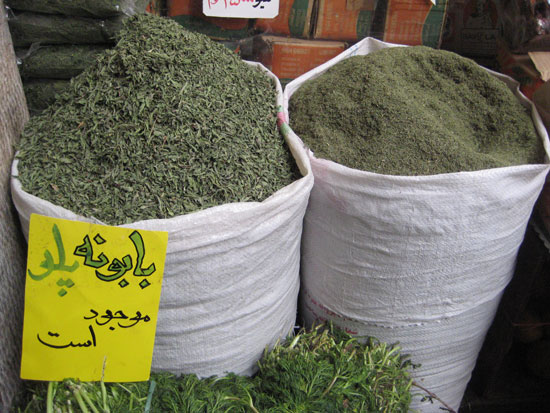 … to dried mint and dill and other herbs used in cooking … 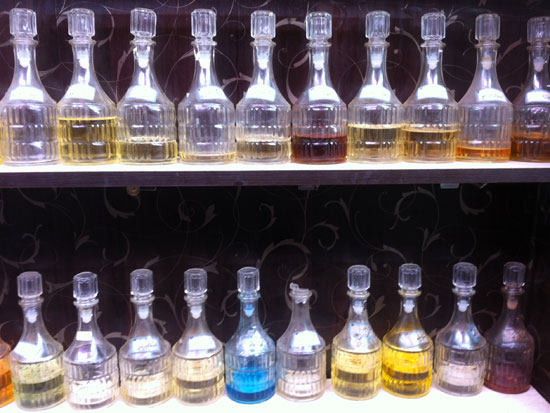 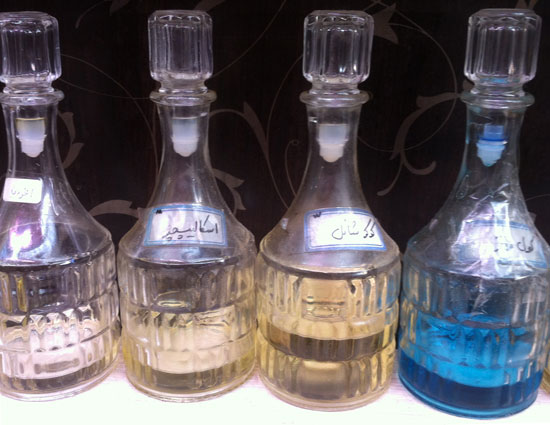 … to counterfeit perfume (the second one from right reads: “coco chanel”)…. 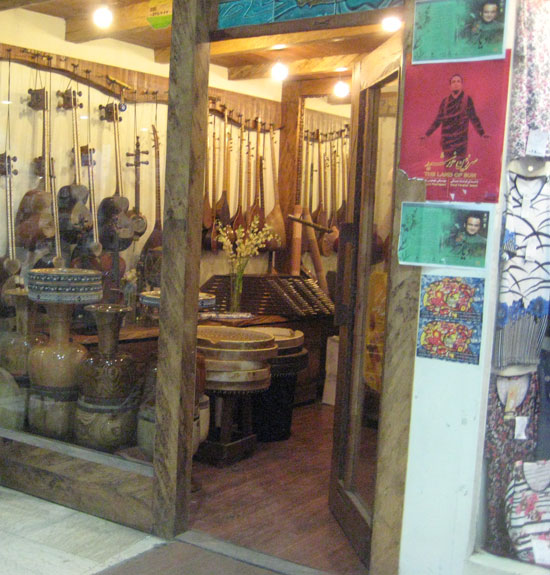 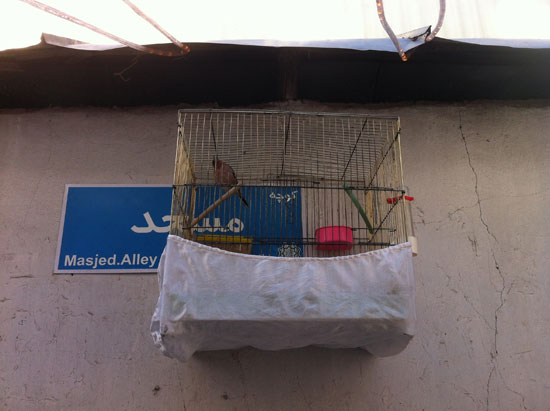 … to a caged bird whose chirping filled the passageway of the bazaar with her song …
.
After having lots of fun browsing and perusing the Tajrish bazaar, we finally ended up in a traditional tea house restaurant. 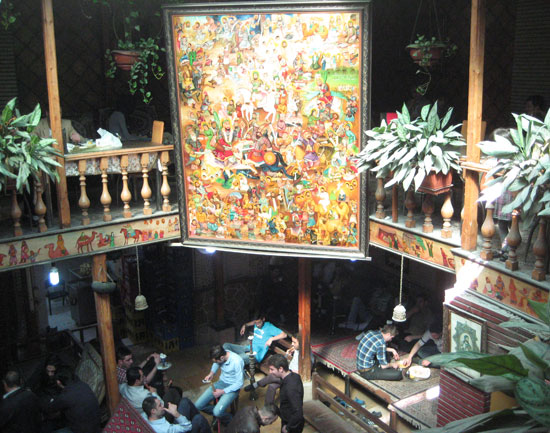 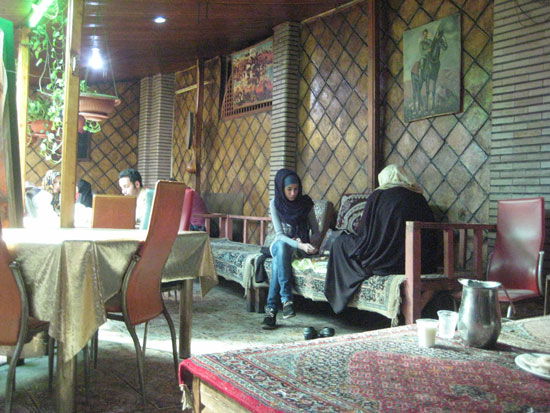 There was a baker right by the entrance rolling dough and baking fresh nooneh taftoon bread with a series of swift, expert moves that were hypnotic to behold (I took a video which I can post when I’m back in the U.S.) and there was an accordion player who was walking around playing a soulful tune. People were sitting on wooden beds covered with carpets – a traditional set up for this type of establishment — eating and drinking. 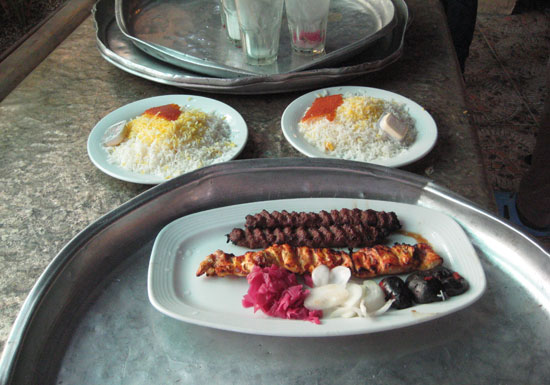 A waiter climbed the stairs carrying a huge tray laden with steaming saffron rice and plates of kabab and I pretty much drooled. Not the one pictured as I didn’t move fast enough to capture that particular scene. Speaking of tantalizing glimpses of yummy Persian food though: I know. I know. I know. It’s what most of you want and are waiting for and I am quite mean for not writing one yet. But if it’s any solace to you, I’ve been doing quite a lot of primary research and field practice by eating a lot of it. Isn’t that a solace?
So back to our story, Maryam and I went upstairs and sat on a carpeted wooden bed of our very own and drank tea. (I have nearly entirely given up coffee and turned into an avid tea drinker since arriving in Tehran.) 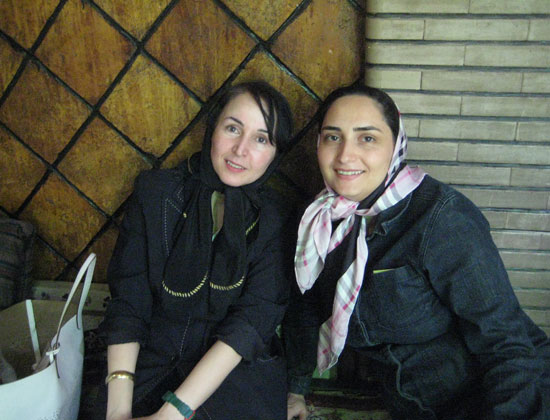 A nice waiter took our picture.
I kept looking around, trying to take it all in with my eyes and ears, and had a hard time wiping off my grin. It can safely be said that I was absolutely in hog heaven. Simply having a blast. I WISH I could share the feeling with you and as we say in Persian: jatoon khalli. “Your place was missing.”
Truly!
Khoda hafez until soon!
By Azita Houshiar
0
Bazaarbazarchaichayeecoffeeeating and drinking in Tehrangahvehgahveh khonehGreetings from IranIranIranian cooking ingredientsIranian foodIranian food blogIranian fruitPersian baristaPersian cooking ingredientsPersian foodpersian food blogPersian fruitPersian girlphoto of coffee shop in Tehranphotos of Iranphotos of TehranTajrishTehrantraveling in IranTraveling in Tehran
A small peek at Norooz in Tehran | Greetings from Iran!
Eating My Way in Tehran | A Partial, Lusty Tour of the Food I’ve Eaten in Iran 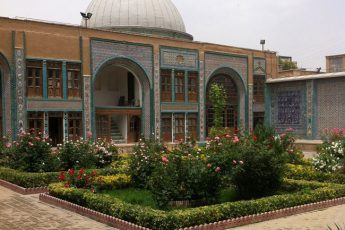 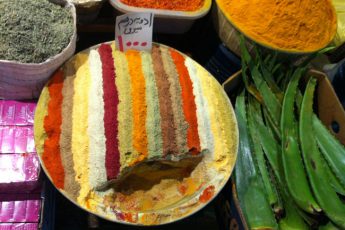