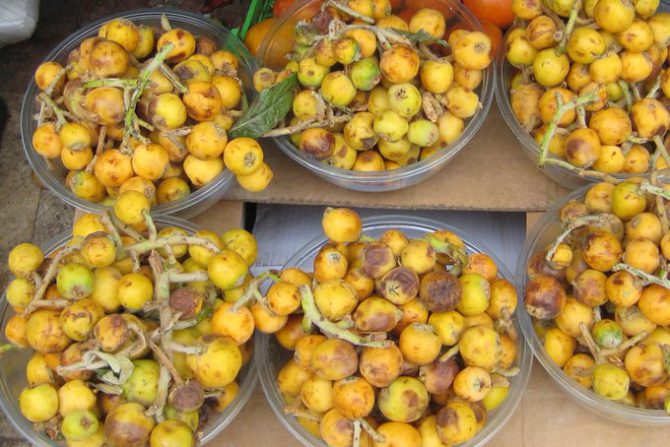 Irooni friends: what is this fruit called again? help! 🙂 pic.twitter.com/3gWWRSNdsZ

[This post scheduled to publish while I’m on my Epic Trip to Iran, part 2.]
So a few weeks ago I went on Twitter asking for help identifying the fruit in this photo (that I had snapped sometime last spring time during my epic trip to Iran) because for the life of me, I could no longer remember its name. Twitter friends came out fast and furious to help (in a good way!) and before you knew it, my mystery fruit was identified as loquat (in English) or azgil ازگیل (in Farsi) or Mespilus Germanica if you want to get all botanical and Latin about it.
A Twitter friend informed me that loquats are quite popular in Pakistan.

Then @Freejust1 told me that there are sweet and sour varieties of loquat in Kashmir and that the tree blossoms in November. He then made me quite jealous by boasting of not just loquat but also peach and pomegranate trees growing in the yard of his house in Kashmir! To prove his point, @Freejust1 shared a peek of his garden in bloom and then he just had to really rub it in by sharing a photo of this view of the mountains from his garden!

@figandquince …That is the view from the garden:)…Just trying to check my pics and some you pics of fruit blossom pic.twitter.com/bi57DpqKh3

I mean! Look at that! I have a bump on my head because I swooned and tumbled off my chair! I have decided that I may just move to Kashmir! Where I may feel quite at home apparently because according to @FreeJust1 “Iran has always had a deep cultural influence on Kashmir which is known in the subcontinent as iran-i-sagheer. (Iran ‘e sagheer means little Iran, by the way.)
Back to our fruit, it turns out loquat (azgil) grows abundantly in California as well, particularly in the San Diego area, and many Californians can boast of having a few of its trees growing in their yards. Laura Bashar, fellow Persian food blogger compatriot over at Family Spice also waxed poetic about the abundance of loquat in San Diego and Tannaz, another dear Persian food blogger, over at All Kinds of Yum noted: “my area of LA blows up with loquats in spring. I have (non-Persian) friends with a tree who make jam from them.” OK, Tannazie, no need to brag! 😉 Another Twitter friend @Dawn_Hawk mentioned her 3 loquat trees as well and made mention that the loquat fruit in her yard were ripening right on the branches as we bantered on Twitter! She also invited me to go harvest them in California! What a sweet offer! I’d love to accept. In fact,  after moving to Kashmir, I will then move to California. (Honestly though, after my recent visits to Los Angeles I swear I am this close and so very tempted to move to Tehrangeles for real and I’d do it too in a New York minute were it not for the deal breaking factors of the cars and the sun, ha ha. After all these years of happily dwelling car-free in New York, I cringe at the thought of having to own and drive a car and navigate traffic and I’m somewhat like a vampire, verily shunning the sun, so as you can see I would not fare well in sunny southern California.)
I was so happy to have received immediate and straightforward answer to my “Identify this mystery fruit” Twitter query but of course @RezaShaer just had to volunteer that: “I think these are called Azgil Japoni, Different from regular Azgil.” Of course, as an attorney, it behooves him to make such distinctions! Echoed by a couple of other people as well who observed that the fruit in the pic are actually called Japanese azgil. Then someone said that “no, these are not loquat” but rather a fruit called “konar“, however, others objected vehemently and pointed out that azgil is not be mixed up with Konar that does look very similar but is smaller and is a fruit of an entirely different type of tree. But people, oy vey, let’s not even worry about these things! 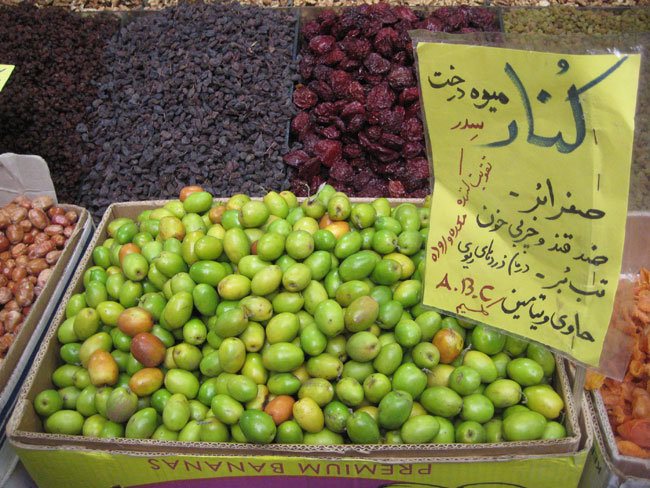 It’s so funny! I Googled for images of “konar fruit” and found one of my very own pictures, ha ha, that I’d published in a post about my tour of the fabulous Tajrish bazaar in Tehran. A fruit which I back then reported as “quite popular to eat in the southern regions of Iran”, and one that “tastes something like a combination of apples and pears.”  Sounds pretty good to me! According to the yellow sign, konar is also good for problems with diabetes, cholesterol, nausea and lung diseases and filled to the brim vitamins A, B, C and calcium. That sounds pretty good too! And also, a sweet friend tells me that “they make ‘sedr’ which is the what they used as shampoo back in the day (and some still do) from the leaves of konar tree.” Very neat, no? According to my friend @andoust whose mom used to make her put the sedr “shampoo” in her hair couple of times a month after her regular shower, it did wonders for the hair. “My grandma and her mom before her all used it too.” Ha! Must give it a try if I get a chance!
I swear that writing about and exploring Persian food sometimes feels like being Alice in the Wonderland and falling down the rabbit hole and bouncing from one amazing thing to another so that you forget where you started and have no idea where you might end up. It’s all fascinating but for the interest of efficiency and for the sake of my sanity (what little shreds and jagged shards of it remain) I’ll pretend I never did hear of this distinction between Japanese and regular azgil and I will be in steadfast denial about dealing further with konar as well! (La la la, my fingers are in my ears. I know not what you speak of.) But seriously, sigh, I’ll honor my blogging duties and look into it and report back one of these days.
In conclusion, it was fun how much activity this one simple question generated (drawing comments from Kashmir, San Diego, Los Angeles, New York, Iran and Pakistan and elsewhere) and it just shows how much people love talking about and discussing food and food related stuff on social media.
Thank you lovely Twitter and FB friends: @Dawn_Hawk @Eyeblinks @sidewalk lyrics @RezaShaer @Freejust1 @HameedPooya and Laura and Tannaz and @zozobaking and @anadoust.
And let’s end this fruity (but not nutty) post with a couple of other sightings of azgil aka loquat aka Mespilus Germanica (a sweet fruit which may just be Japanese azgil but is not to be confused however under any circumstance with Konar) as captured by your faithful blogger, aka moi, during what I frequently and persistently (although hopefully not annoyingly) refer to as #myepictriptoiran. 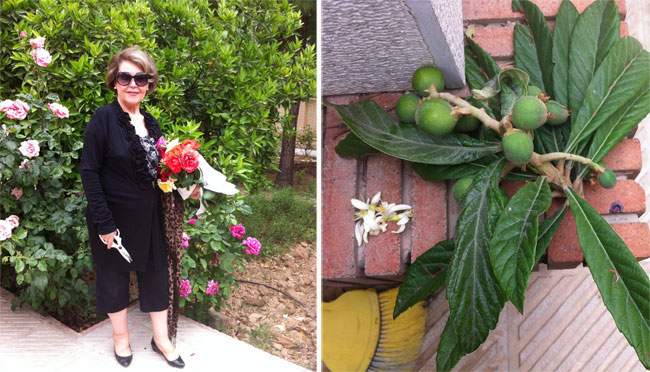 And azgil as detected (and very probably gobbled up shortly thereafter) in blue glass goblets in lovely Haleh‘s kitchen.

Till soon’ish & until then may you have many ripe delicious things in your fridge! 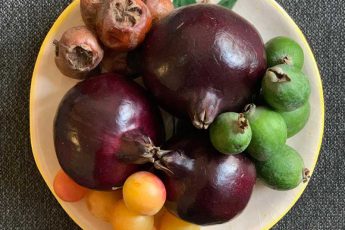 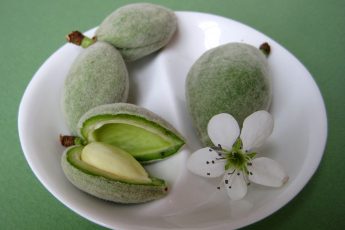