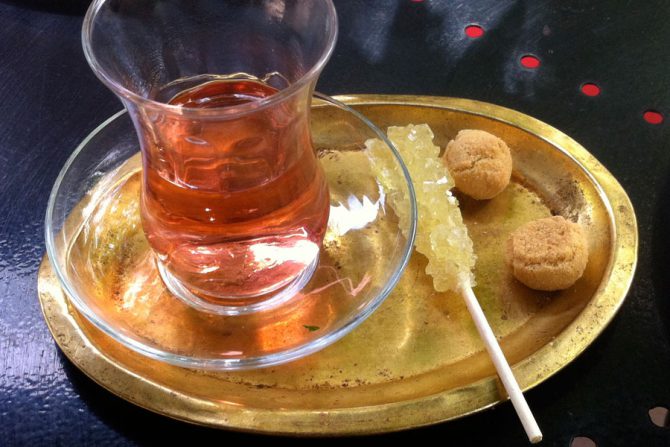 Let’s fire up that samovar and brew some fragrant tea (or chayee as we say in Farsi) for this second installment of “Drinking in Iran” — a photo-essay series that documents some of the tasty drinks aka nooshidani yours truly had to sip, gulp, swig, imbibe, devour, knock back, taste, or merely gaze at covetously during my sentimental, epic trip to Iran; and that in the bargain, attempts to explore the people and culture of Iran and share some travel stories with you as well!
So grab some habe ‘ye ghand (sugar cubes) or something equally sweet, kick back, and let’s enjoy some good old fashioned chayee, Persian style! 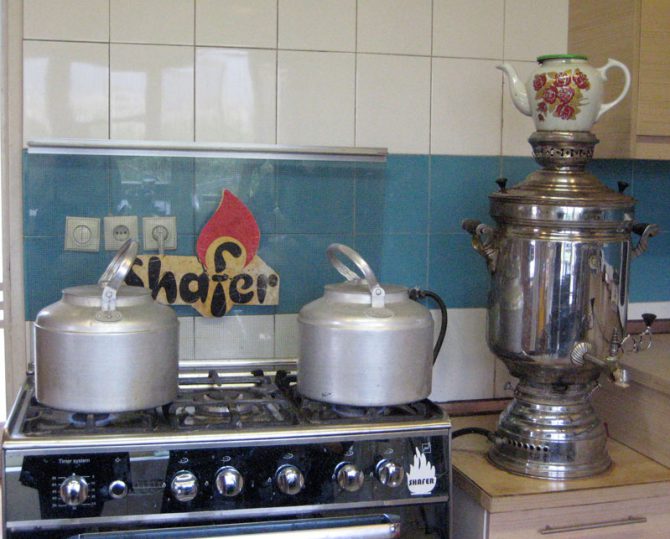 Tea is the most common, ubiquitous drink in Iran. Whether in someone’s home, in a stall in the bazaar, or in the kitchen of the House of the Artists (aka khaneh ye Honarmandan), there’s always a kettle or samovar gently boiling and bubbling and dreamily humming; and there’s always a pot of tea either being made or a cup of tea being sipped. That’s just the way it goes. 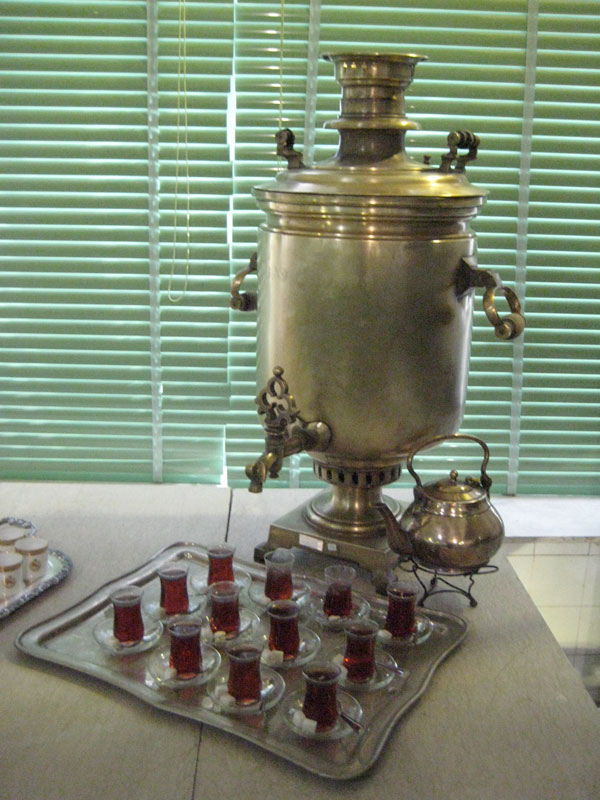 This samavar and tea service are on display at what used to be the kitchen compound of the Pahlavi Dynasty’s summer palace (Sa’ad Abad Palace – in the northern part of Tehran) which has now been turned into a museum. Note the special type of glass tea cups – which we call ‘estekan’ — and the pair of sugar cubes next to the estekan. 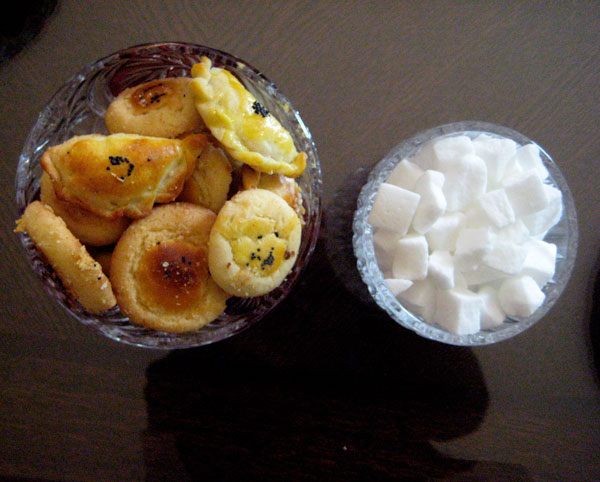 Tea may be a global beverage – entirely commonplace – but drinking tea in Iran is made less ordinary because of the nicety of the associated rituals – such as the touches of sweets served alongside with this familiar beverage.
Sugar cubes are the most common and traditional way to sweeten tea. The old-fashioned way (but not chic, darling!) of having sugar cubes with tea is not to stir and dissolve it but to bite and suck the sugar cube between one’s teeth while taking sips of tea. It’s kind of fun to do but the sound effects and required facial mannerisms make it clear why the practice is frowned-upon-in-elegant-society. I like my tea with milk and no sugar (blashphemy, I know) but if I did like my tea sweet, I wouldn’t have minded occasionally practicing this method on the sly in private to my heart’s content. Elegance be damned! 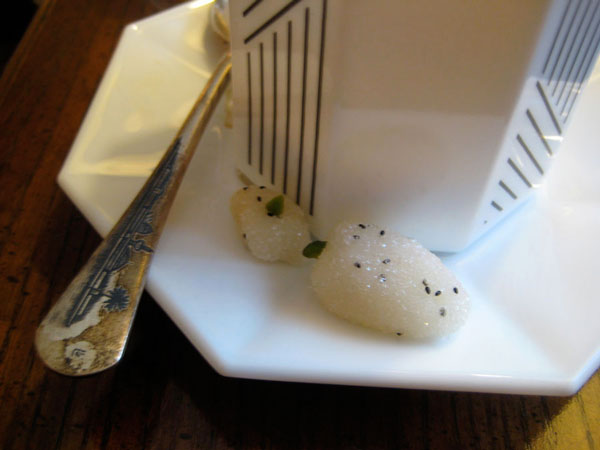 As a guest in someone’s home, there are many dainty ways to sweeten the tea. Like this tea served with sparkly homemade ‘tut’ (Persian marzipaln mulberries) that I got to enjoy during a Persian new year ‘did va bazdid‘ visit with my lovely friend’s elegant family. (Note the beautiful antique silver spoon!) 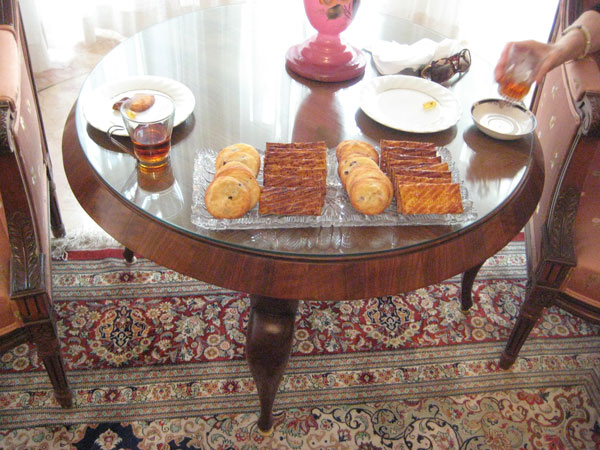 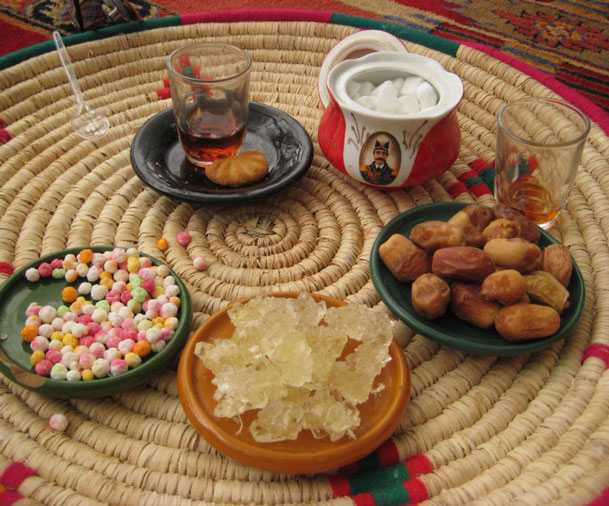 In a trendy café, chayee may be served on a cute tray with nabat and almond cookies.
In Shiraz, a festive meal in a garden with live music (while seating and eating cross-legged family style on a kilim-covered wooden platform) culminated – to my heart’s delight – with a tray laden with assorted sweets and an adorable ersatz tea pot adorned with the portrait of a grumpy mustachioed Qajar royal gent. 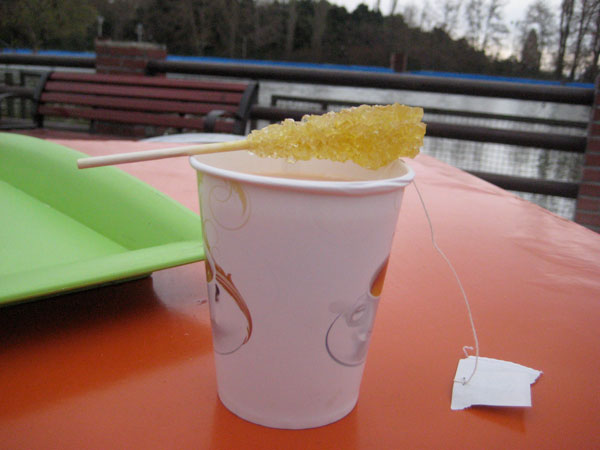 A typical sweet served with tea is nabat, aka rock candy. These days, nabat is served on a stick (much like a lollipop) that one dunks in the tea (a modern iteration of an old-fashioned idea) and stirs until it dissolves. A charming way to sweeten one’s tea.
This was at the lake front cafeteria of the very scenic Park ‘e Melat (formerly Park ‘e Shah ‘anshahee.) 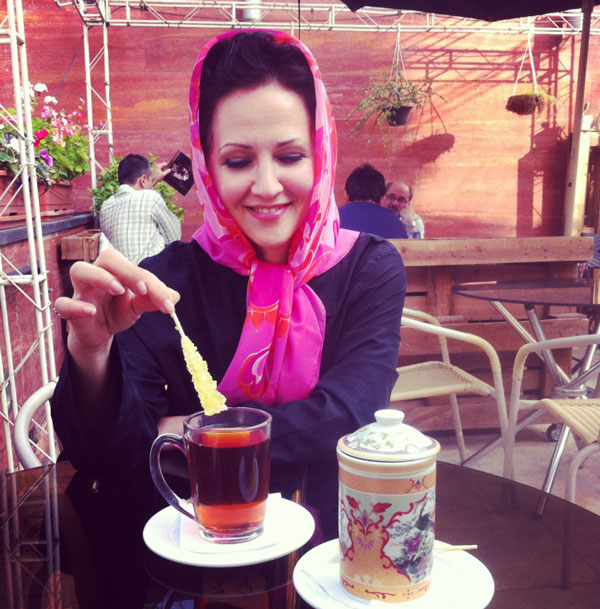 Sometimes it was not the nabat (rock candy) but the charming sweetness of the company that made the tea special. Like meeting (for the first time in real life!) the lovely Simi, fellow Iranian food blogger and now dear friend in a trendy Tehrani café at (Bagh ‘eh Ferdows) Ferdows Garden. [The Full account of meeting Simi and another lovely Persian food blogger friend in Tehran coming up one of these days!] 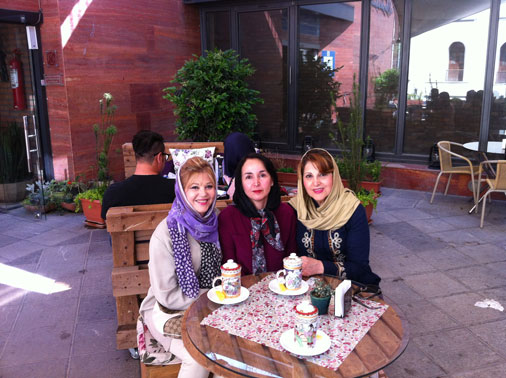 While I’m at it, may as well add this photo of yours truly (in the middle) sandwiched between gorgeous family friends. This was also at Bagh ‘eh Ferdows, but in the front garden. 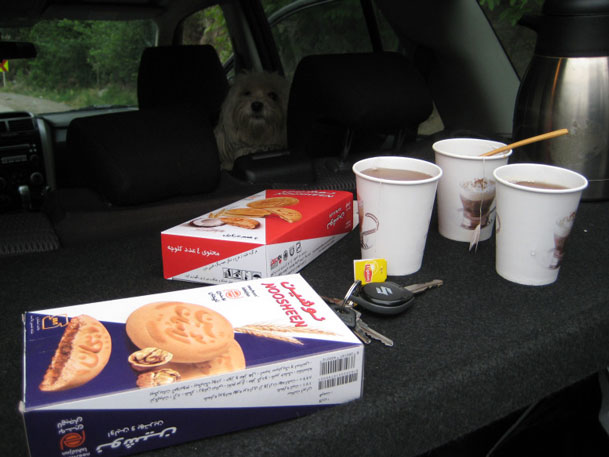 Sometimes it was the company, the kooloocheh and the scenery that made even a weak tea-bag-brew an unforgettable cuppa’ for the books!
This was on the way back to Tehran after a road trip to shomal  – the beautiful Caspian sea region.

Sometimes, tea with lemon was just a utilitarian workhorse.
The only way to chase a rich breakfast of kaleh pacheh! (I may have mentioned this already, but kaleh pacheh was the very first thing I had to eat when I arrived in Iran. At the crack of dawn! It was awesome! ) 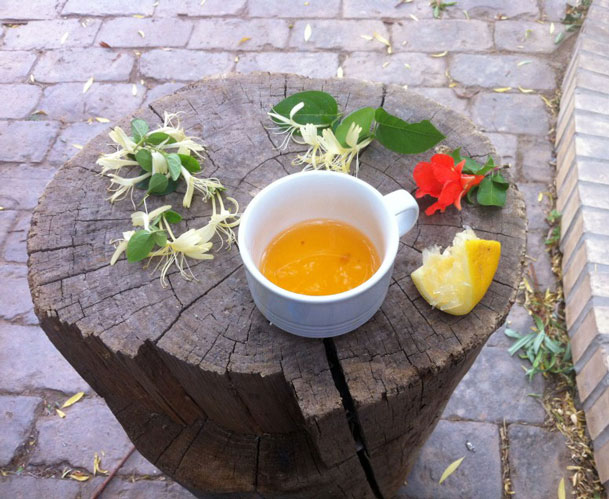 And sometimes tea with lemon with a friend in a garden blooming with fragrant honeysuckles in the ancient city of Yazd was nothing short of magical … a tangible ode to the dizzying perfection of a moment in life. Sip, sip, sip! I’ll drink to that!
Until we next meet, wishing you the perfectly brewed perfect-temperature tea with the au juste sweet pairing. 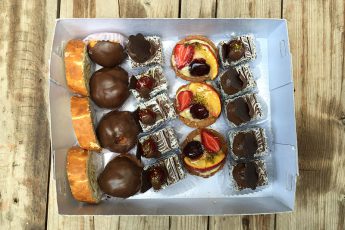 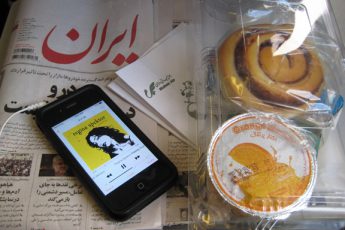