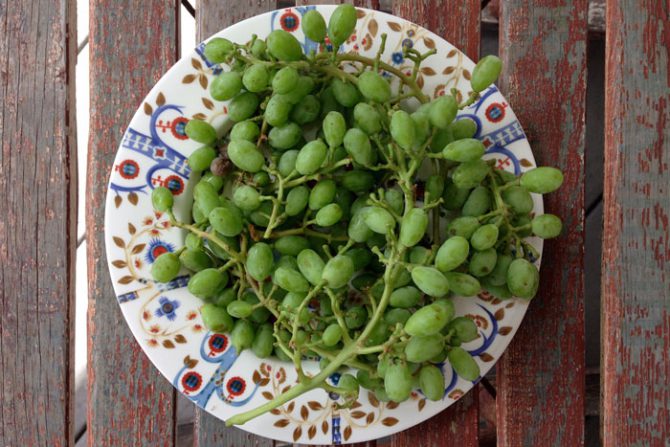 This post is dedicated to the memory of Doctor پ . A wonderful physician, musician, family friend, and all around lovely gentleman whose presence was a boon to all who knew him and who will be dearly missed. May he rest in peace.

Recently I made a short and sweet trip home for a visit with my folks when among other things my mom made this and this and also did this; and when I got to hang out with Azi2 and also got to go to a do’reh (a regular monthly-or-so Persian get-together among friends who take turns hosting) and have a fun visit with a host of dear and old family friends who I had not seen in a good while. Some of my favorite people in the world. Sight for sore eyes! A true pleasure!
My folks live in the DC Metropolitan area and while it is by no means the new Tehrangeles, there are a good number of establishments where one can grab a quality Persian chow, be it polo khorosh or kashk ‘e bademjan or bastani and reportedly even very good Armenian pirooshki. There are also several good Persian grocery stores scatterd in the area, including a smallish but quite good store near my parents where one does seem to find most everything required to run a respectable Persian household, from kashk to various types of Persian bread to halva ardeh to — as I was thrilled and squealed to find stashed in the fridge — stalks of perky unripe grape clusters!  Or what we Persians call ghoreh غوره. (Query: The wine aficionados amongst us may perhaps identify a better name for “unripe grapes”?)
Gentle reader: you may by now have a noticed a pattern with Iranians and their love of unripe fruit and: it’s true!  Be it unripe almonds (chaghaleh badoom چاقاله بادوم ), unripe green plums (gojeh sabz گوجه سبز), and now unripe grapes — which are usually picked halfway before maturity.
Are you familiar with that classic Aesop fable of the fox and sour grapes? The story was well known in Iran as well. But what the roobah didn’t know and Persians have known since times of ‘yore is that sour grapes can be quite wonderful!
A staple of the Persian pantry, unripe sour grapes (ghoreh: غوره) and verjuice (or abghoreh: the tart juice of unripe grapes) is used as a chashni (taste, flavor) to add a bright but gentle tartness and deepen flavors in khoresh (Persian stews) and abghusht and tas kabob and āsh (thick hearty Persian soups.) 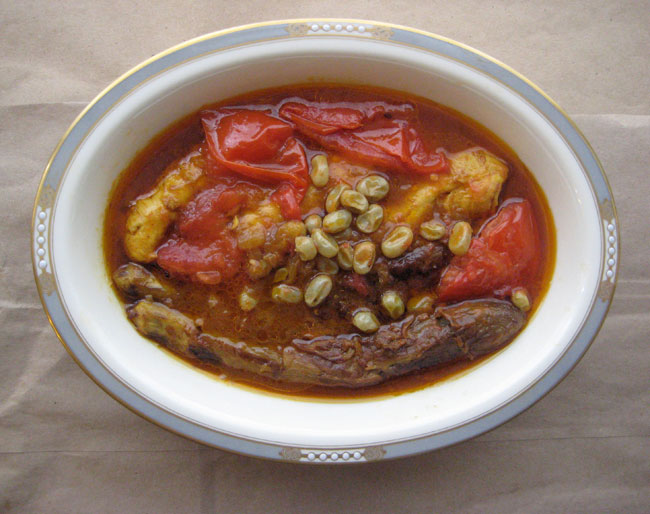 Fresh sour grapes have a very fleeting season – a few weeks late in spring – so to preserve ghoreh’s goodness for use throughout the year, Persians had several tricks up their sleeves.
One that we’ve already touched upon is juicing the ghooreh to make abghoreh or verjuice. (Fun linguistic fact, the word verjuice comes from the French words verjus which literally means green juice!) Maman says in the olden days before the availability of store-bought verjuice there was a whole ritual where each family would purchase as much of sour grapes as was within their needs or means and then wash and crush the grapes and store the extracted abghureh in a cool dark place in a very specific type of glass bottle with a long narrow neck — that could then be used as chashni the whole of winter.
Another method was to dry out the ghureh and then grind it into a powder (gard ‘e ghoreh گرد غوره) form; or, they would pickle the unripe grapes (in verjuice, or in salty water); and of course now in modern times, ghoreh can be frozen for later use.
Ghureh is extremely beneficial for various health problems. Rheumatism and diabetes among them. Maman tells me a story that when she was growing up, there was a doctor named “Hakim Abghureh” (literally: Doctor Sour Grape Juice! Ha ha!) named thus because whoever went to him with ailments would be prescribed ash ‘e abghureh (a verison of Persian thick hearty soup made with plenty of verjuice) to clear and clean out the stomach and intestine as the good hakim believed that all diseases gather in the stomach and the intestines! 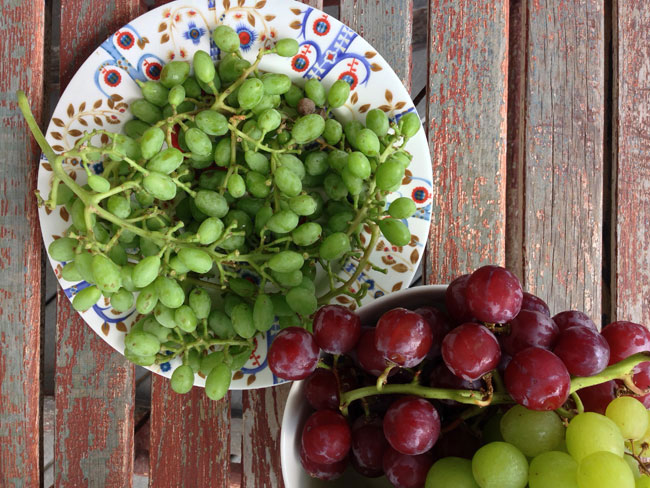 Unless you are a wiley fox not interested in sour grapes, below are directions for making your own: verjuice; ground sour grapes; pickled sour grapes; and the best method for freezing these tart fleeting gifts of summer.

Starting point applicable to all methods of preserving sour grapes: pick mushy, discolored bits and discard.
How to make your own homemade verjuice (abghoreh): First question what drives you to have this urge? Ha ha. Kidding, ’tis a labor of love and one’s inner Martha must be appeased from time to time. Be warned however that it takes nearly 10 pounds or more of sour grapes to make one mediums sized (if that) bottle of verjuice, and sour grapes, harvested here in the U.S. in California, do not come cheap. (Mom reported she got hers for $7 a pound.) In any event, if you’re determined to pursue this crafty course of action, try to to purchase the juicier looking of sour grapes that’s available to you. Remove grape from stalk, wash well, then juice sour grapes in a juicer. (It’s preferable not to make verjuice using a food processor or a blender since those machines will grind the grape seeds as well thus giving verjuice a bitter tang that is far from ideal.) Pass the pulpy juice through a sieve and use immediately.
To preserve verjuice for later use you, boil verjuice in a pot for a few minutes. Remove from heat, add a bit of salt, allow to cool, then store in dry sterilized bottles. Tip: If possible, it’s best to use one-serving-size small bottles when storing homemade verjuice.

How to make your own homemade ghoreh preserve to use throughout the year: Remove the grapes from the stalk, wash, and allow to dry completely. Once bone dried, store in a dry sterilized jar and top with enough verjuice to cover plus a bit of salt.  This method, in vogue in Kermanshah and possibly other regions of Iran, is known as “ghoreh ghoreh.” Double unripe grapes that is! Cute, no?
You could also preserve ghureh in ab namak (salty water) instead of verjuice.

How to make your own ground sour grapes (gard ‘e ghoreh): Wash sour grapes, remove from stalk, gently pat dry and spread over a tray lined with fabric or paper towels. Leave for a few days where it would get plenty of direct sunlight till it dried out. Grind in a processor into a powder. This becomes a tasty and tart chashni چاشنی (taste, flavor) that makes stews and soups quite lovely and delicious. You could also use it to marinate fish and fowl and BBQ meat. Because, pour quoi pas? If a hint of tart is your thing, ground sour grapes could be your best friend.

How to freeze your sour grapes! Wash sour grapes thoroughly and then remove from stalk. Bring a pot of water to a brisk boil. Add sour grapes and boil for only 30 seconds.  Drain in a colander and immediately give it an ice bath. (A bowl filled with ice cubes, roomy enough.) to chill the sour grapes quickly. Then drain once again in colander, spread to completely dry on a piece of fabric or paper, and then fill freezer bags with sour grapes. Write the date on the bag ad freeze for up to a year. Note: another school of thought admonished that washing sour grapes prior to freezing allows discoloration (turning yellow instead of green) and suggests that you freeze unwashed sour grapes and when ready to use, thaw and wash grapes then. 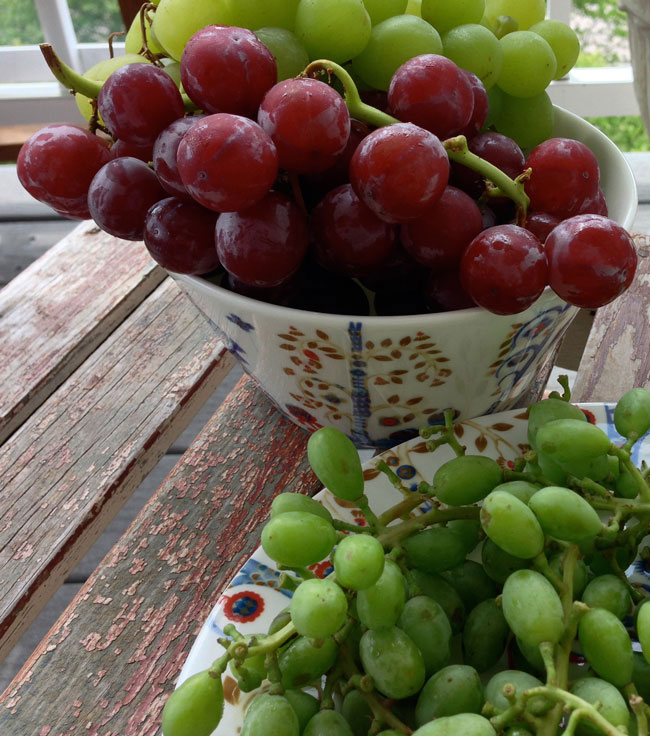 Make it, enjoy it, and noosh ‘e joon! 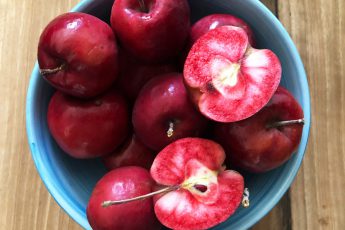 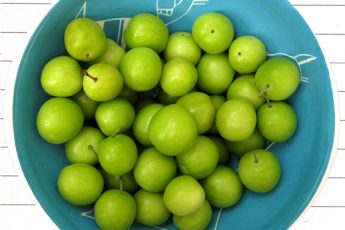