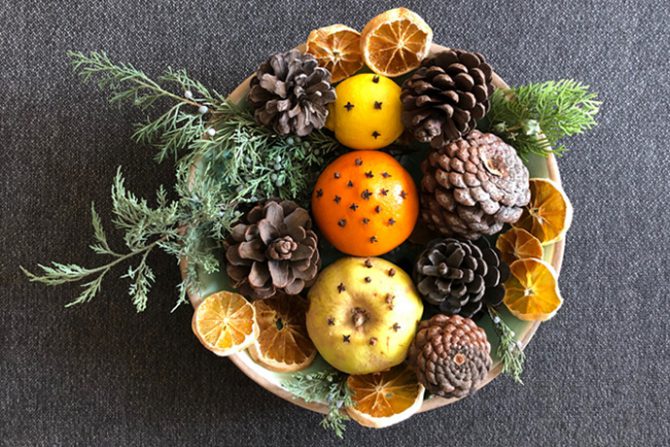 Just as I was plump in the middle of writing a blog post listing all the reasons to love bomb the clove spice, I found out about and got distracted by these things made with cloves called pomanders & I couldn’t resist making a detour to write about them first.

An aside. When I first moved to San Francisco (lived there for a few years, loved it) I had such a hard time with the name “Embarcadero” that I kept calling that fabulous waterfront area “abracadabra” for an embarrassing amount of time until the name finally sank in. I’m afraid it’s going to take a while till the name “pomander” sinks in as well. I keep thinking it’s pompadou or pomadore …. insert cringy sweaty emoji here.

OK. What Are Pomanders?

In our modern era, a pomander is simply a citrus fruit, often an orange, pierced by cloves.

Originally, however, a pomander, from the French word pomme d’ambre or “apple of amber,” referred to an ornamental container of perfume, that was worn as a necklace or bracelet or attached to a belt or held as a protective talisman.  “The container could be made of gold or silver and eventually evolved to be shaped like nuts, skulls, hearts, books and ships.” (Source)

This very expensive and highly valued jewellery was the present of choice, especially during the Crusades when knights exposed themselves to risks so great that a crucifix alone could not protect them from harm. Pomanders were therefore items for kings, princes, knights and wealthy dignitaries (Source) 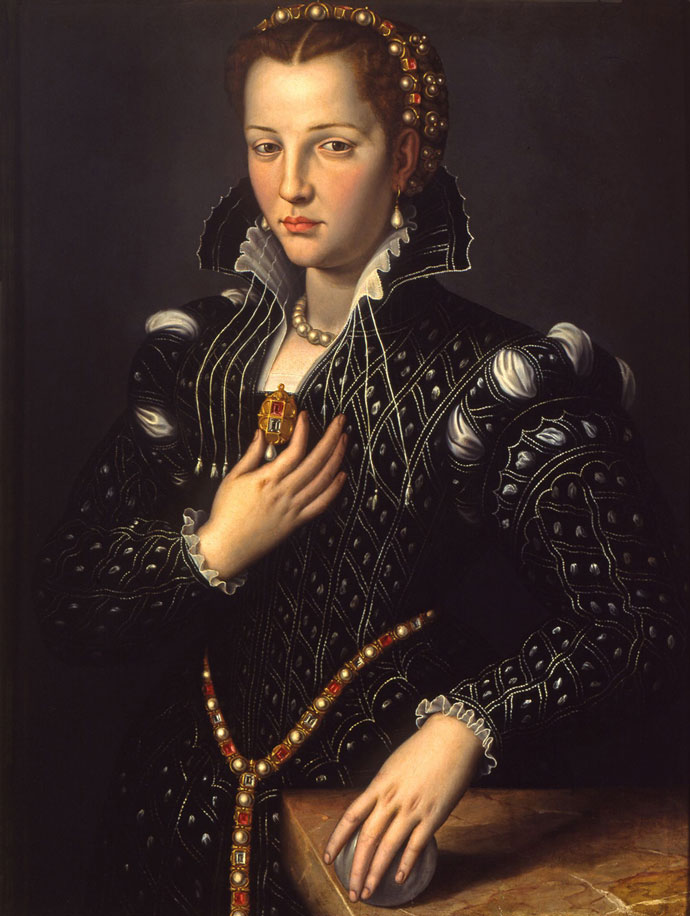 Lucrezia de Medici with a bejeweled pomander, an expensive protective talisman for kings, knights & wealthy families accustomed to poisoning each other.

What are Modern-Day Pomanders Used For?

Pomander is a lifehack that can trace its roots to the medieval age. That’s how I like to think of it.

As noted above, in the olden days, pomanders were expensive containers of scent used to guard against infection, to camouflage foul odors, and also as a protective talisman.

The modern-day pomanders are infinitely more humble in their status, aspirations, and scope of purposeful existence:

As the clove-studded fruit dries, the pomander releases a lovely scent. As such they are used to scent a room or are hung (fastened by a ribbon) in a wardrobe to infuse it with fragrance. In addition to being wonderful natural room and closet fresheners, pomanders are also used as Christmas & other holiday decorations and centerpieces. My mother was surprised I’d not noticed this holiday tradition. What can I say, I am a deeply flawed person.

A version of the pomander with oranges, cloves, oils, and a golden ribbon is used as a recovery charm in witchcraft. But oh dear, let’s not get into that.

How to Make Pomanders?

Pierce citrus with the clove spice. Then, pierce your own heart with the rapture of domestic bliss.

In other less rapturous words: grab a firm fruit and a bunch of whole cloves. Stud the fruit with the cloves. Voila, your work is done! See, pomanders are easier than Earth Girls! 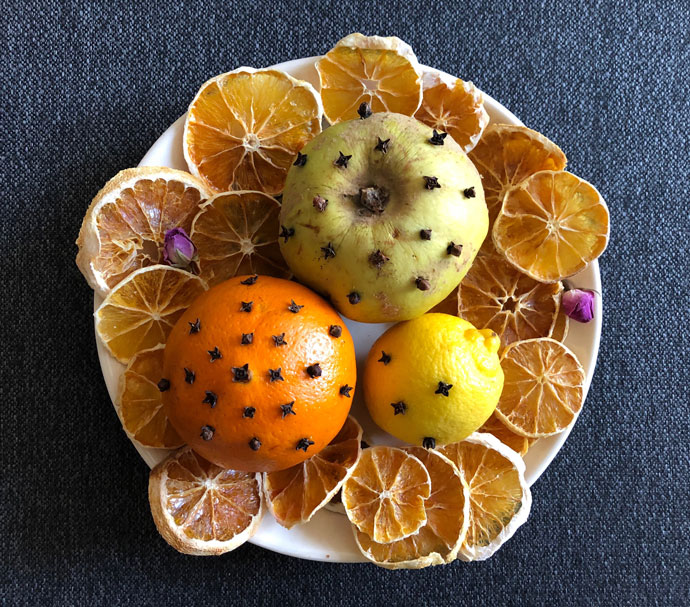 How Long do These Spicy Beauties Last?

Cloves are a natural preserving agent but at room temperature, pomanders will stay fresh for only 3-4 days before horrid uncle moldy comes to visit. You can opt to refrigerate pomanders at night to prolong their life. Dusting with cinnamon helps extend their life as well.
⋅
⋅ 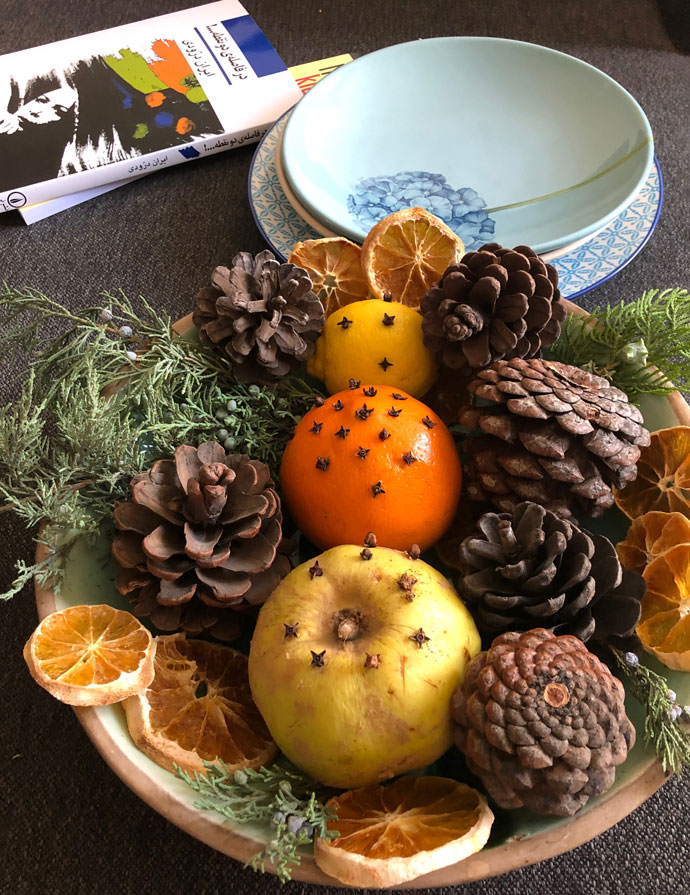 And that’s it for this aromatic tour of my posting detour.

A word, if I may, before I bid you farewell till the next post:

If you enjoy my blog, please consider supporting me. To do so, you can click on the ads, follow on social media, and spread the word about Fig & Quince by sharing links with your friends and family. ♥ Thank you! ♥ 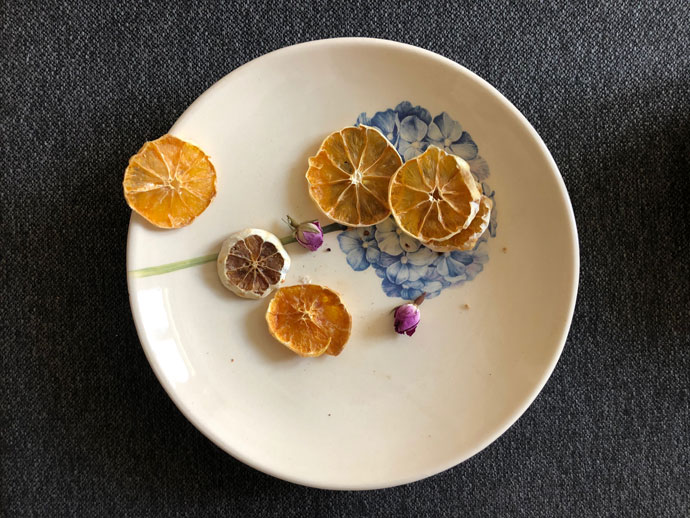 Love it when props arrange themselves artfully. Happy accidents!

Stay fragrant and spicy till we meet next! 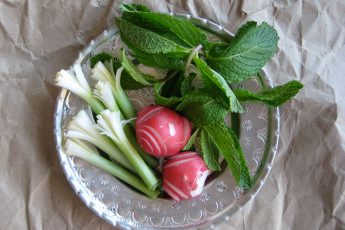 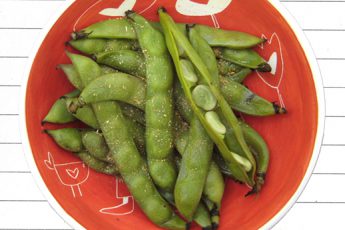