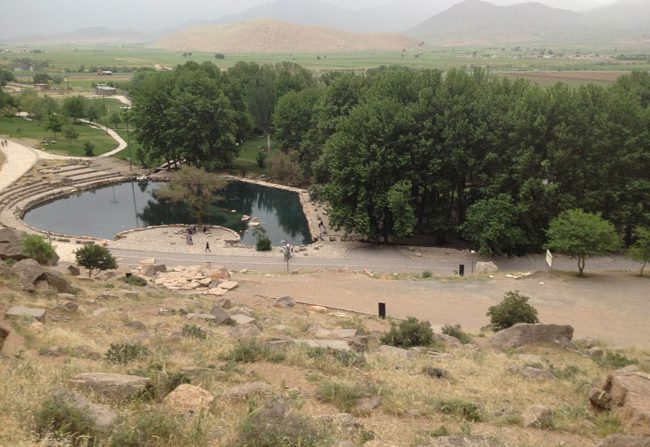 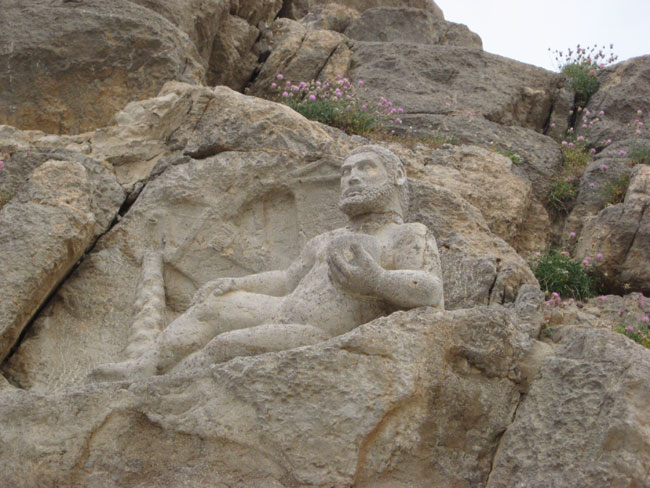 As I’ve been saying, I only had 3 short days in Kermanshah, but it was one of those trips where every minute counted and was quality — either fun, poignant, intriguing or drole, and often a wonderful combination of all of the above. In this penultimate post in the Trip to Kermanshah series I’ll take you with me to visit the two major historical attractions of Bisotun and Tag-e Bustan.
On an overcast afternoon, me and cousin Roshanak and Mr. S and Amoo Fereidoon drove to Bisotun. It was nearly an hour long drive but we had a lot of fun. I videotaped some of it, see below. Since it’s not dubbed into English, I’ll tell you the context:

We were discussing the abundance of Muhammadi roses in Roshanak’s house and I asked Amoo Fereidoon to describe how to make rosewater. Amoo readily started talking about the golab making process, using an old fashioned Kermanshahi word (‘”miyan” instead of ‘vassat’ to refer to “in the middle”) that promptly had Roshanak dissolving into peals of laughter. Then the talk turns to the ancient statue of Herculus at Bisotun and what’s happened to it (i.e the nude statue’s immodesty was covered in the period after the revolution and at some point Herculus was sadly beheaded but its head was later replaced) and that made all of us start laughing as well. What is not documented in the video and what I just remembered with a jolt of pleasure and also a pang of covetous cognition of absence, was that Roshanak had brought along a huge box of assorted shirini Kermanshahi and lots of fruit for us to snack on our little fun road trip. It was such a good wholesome time! Simple things in life, people, simple things, those are the ones that count when you come right down to it.
Once we arrived at the massive car park area of Bisotun it was drizzly so Amoo Fereidoon stayed put in the car and took a power nap while Roshanak and Mr. S and I went and hiked and saw all the sights of this majestic mountain bearing historic traces of ancient Persia  … passing by the aforementioned 480 BC era Hercules; the “Farhad Tarash” parts of the mountain where the rocks are made smooth because as legend goes that crazy-in-love (or plain crazy) Farhad chipped at the mountains in the besotted hopes of winning Shirin’s love; and the gorgeous cliffs with world-famous bas relief and inscriptions dating back to Darius The Great’s time.
I’ll leave detailed info about the site and its history between you and Mr. Google but will tell you that Bisotun was registered in UNESCO’s List of World Heritage Sites in 2006.
Here are some pix: 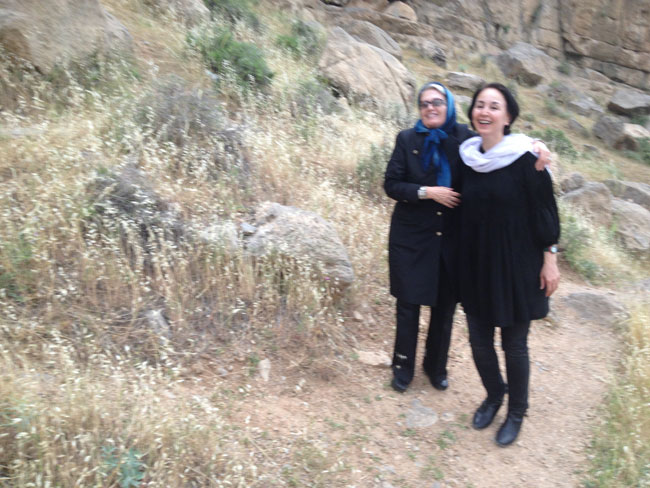 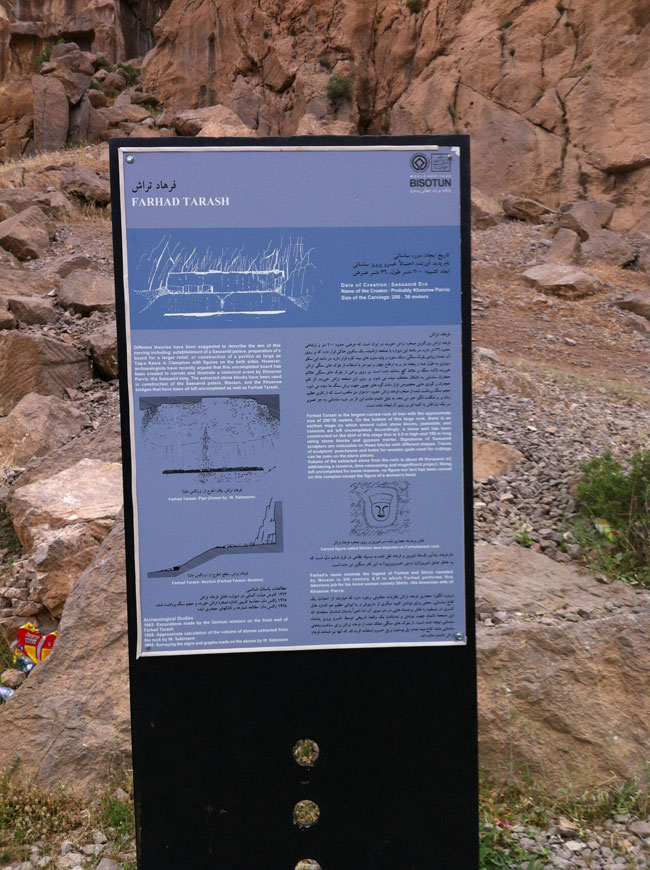 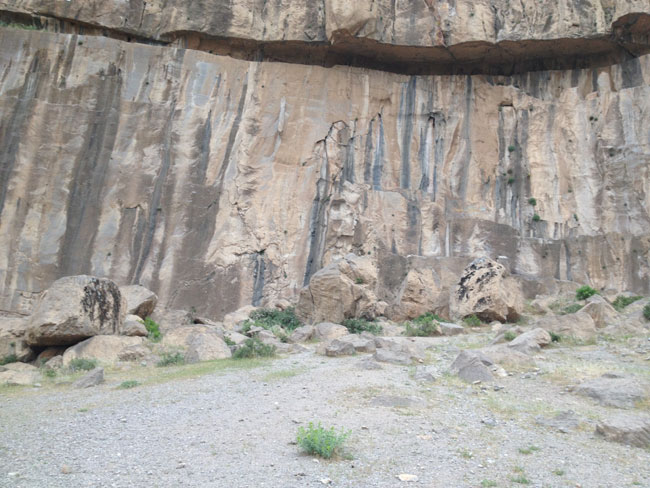 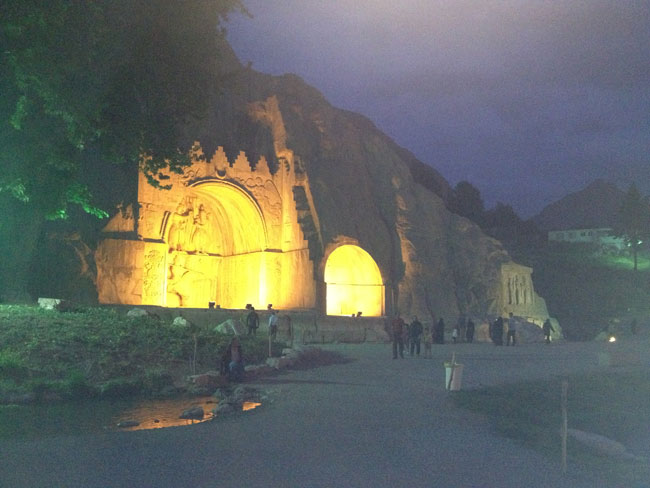 The legend goes that the Farhad the Stonecutter (Farhad Tarash) in love with Princess Shirin (who did return his love) was tasked by her father the king with creating a canal in the mountains to gain permission for her hand. This huge smooth rock face part of Bisotun mountains – popular with climbers – is allegedly proof of this legend. The story of Farhad and Shirin is riveting and (spoiler alert!) it has a Rome & Juliet ending. Here’s link to a very nicely narrated account of Shirin & Farhad: A Persian Love Story.
I don’t have any pix of the Darius the Great bas relief at Bisotun (I took it in instead of clicking away on the phone) so we might as well get in the car and drive to Taq-e Bustan, the other major historical site covered that day.
We drove to Tag e Bostan, in a race with the sun, arriving just before the sunset, and took in the beauty of this classic attraction of Kermanshah. I very much missed my father while I was there and hoped that he himself would one day soon return to this site which as my Amoo and dokhtar amoo described has long been a favorite family hangout. 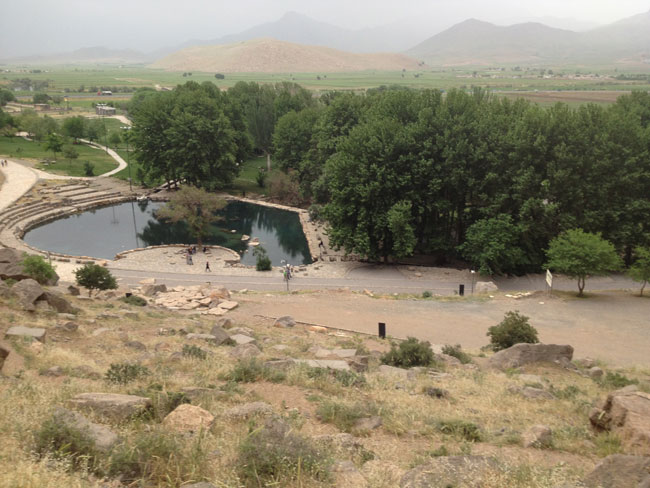 Sassanian era bas reliefs set inside and around alcoves carved into the majestic Tag Bostan mountains, a historic attraction that is surrounded by popular open air restaurants and a boating pond, was the final leg of my second day of sightseeing odyssey in Kermanshah.
And here’s another video below, offering a glimpse of Tag Bostan and the surrounding boat pond … excuse the wobbliness, and please do excuse the high decible screetch of yours truly. I am loud, I realize with dismay! Note to self: pipe it down, dude!

Here’s how the day ended:
After duly seeing the sights at Tagh Bostan, we grabbed a wickedly good dandeh kabab (Persian rib BBQ served with bread, oh my gosh so yummy I can’t even begin to tell you, jayeh hamatoon khalli) and called it a night. A very good night.
Stay tuned for the final installment of the Trip to Kermanshah series when I take a lusty tour of all the yummy food I had to eat there. 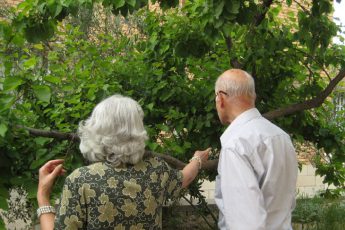 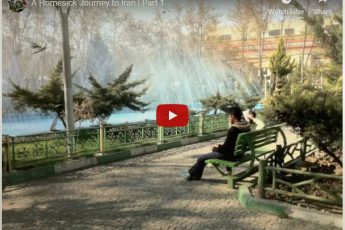