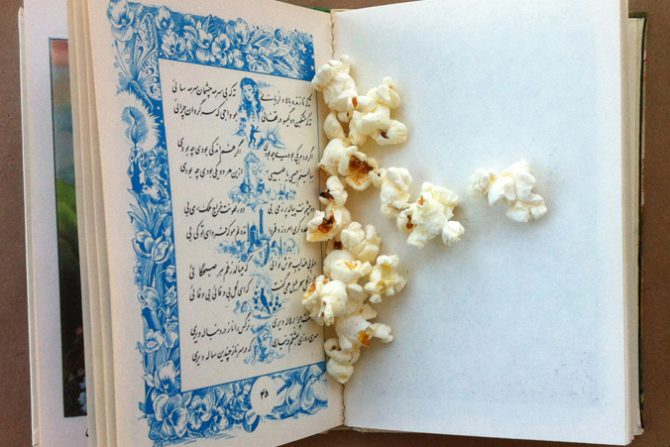 Here’s how the Persianizing popcorn idea came to be:
I’d like to lose 10 pounds. This is not for health reasons, I confess. I’m fit, in fair shape, and knock wood, no health problems. It is, I confess again, for combined reasons of vanity and comfort: I like how I look and feel when I’m a tad bit lighter. Now, losing weight is not a unique or laudable goal by any means but it is a fine goal so far as those things go. In any event, it is my goal. So, again: fine. But the problem is that as much as I like to lose these 10 pesky ponds, I am a shekamoo. I really, really like to eat. D’uh. I have a food blog! And if you’re reading here, I don’t need to tell you how amazing and awesome food is. In fact, certainly one iteration of heaven might be that it’s a place where you’ll get to eat anything and everything you want, as much as you want, without any consequences. Glory be! Amen!

Now, I have mastered portion control when it comes to meals. In fact, not to brag, but I returned from my epic trip to Iran a good five pounds lighter than when I entered Iran. OK, I am bragging but I hope you’ll forgive me, because you see, it was no mean feat to both allow myself to taste and enjoy the seemingly infinite array of incredibly delicious food available to me in Iran, the kind of food that I had been pining for with nostalgia and day dreaming about with drool forming in the corners of mouth, and yet manage to avoid the slippery slope of gorging with reckless abandon. A fine line to cross. Not a line as scary as this but one that did take a good bit of conscious exercise of self-control and self discipline. Discipline and control of self are issues that I have grappled with (with some dire consequences) my entire life and it has taken quite a bit of soul searching to little by little trade my tendency for leaning towards instant gratification and its much darker sibling, self-destruction (hello darkness my old friend) and to instead pause and consider my options and at least make an attempt, feeble as it may be, to make choices that would have positive results. As such, I am indeed proud of having gained (ha, unintended pun) somewhat of an upper hand in this battle arena and thus hope you’ll pardon me as I pat myself on the back. Pat, pat, pat!
Anyhow, like I said I’m more or less in control when it comes to meals but my Achilles’ heel is that I love and crave to munch on a snack. And by snack, I mean a fun snack. And by a fun snack, I of course mean: junk food. Heavenly heavenly junk food! Boy do I love junk food. For awhile, I’ve assuaged this craving by munching on Sour Power Straws. Here are the pros: they are sour and chewy in the most wonderful way; there are 9 straws to a package thus allowing one to get a good bit of noshing mileage out of it; and at 175 calories, so not a big deal. I almost burn as much walking to the deli! (I also see things like this when I go to the deli. Which: my eyes! Lord have mercy!) But Sour Power Straws take their toll on the surface of the tongue and I do enjoy and value my poor tongue and its awesome taste buds so it was time for me to turn towards something else.
As much as I enjoy sweet things, give me sour and salty any day, and if you make it crunchy too, I will go weak in the knees and start drooling. Like: salt and vinegar potato chips? Oh my gosh. I could eat a mountain of those! So with crunchy being the operative word, I thought: pop corn! And I tried to figure out a way to make it taste salty and sour in the best way possible.
Sadly, a bag of pomegranate powder I’d bought in the hustling and bustling Babolsar market in the Caspian sea northern region of Iran, one that I had duly and lovingly carried back to the U.S with such high hopes and tender dreams, left me heartbroken by going all bad and moldy. Otherwise, I would have melted butter and mixed it with the aforementioned tangy sour awesome pomegranate powder. But now what? It was back to Persianizing square one!
It is a truth by now universally acknowledged that when it comes to Persianizing food, you throw the following at it: rosewater, saffron and cardamom. Ahu of Ahu Eats (a wonderful fellow Persian food blogger) calls it “the holy trinity of Persianizing!” Ha! Good one! The Persianizing trifecta!
Now, the mere thought of either rosewater or cardamom with pop corn makes me pucker up — and not in a good way. But saffron and popcorn? Totally makes sense. And guess what? Hot freshly popped corn sprinkled with salt and drizzled with a melty concoction of butter and saffron tastes really good. Shocker, I know! Alert the press! And I know, I know, butter is not that great when you’re aiming for preserving your girlish figure but a little of it goes a long way. I mean you don’t have to drench the pop corn with butter, just add enough to give it depth of flavor and taste. 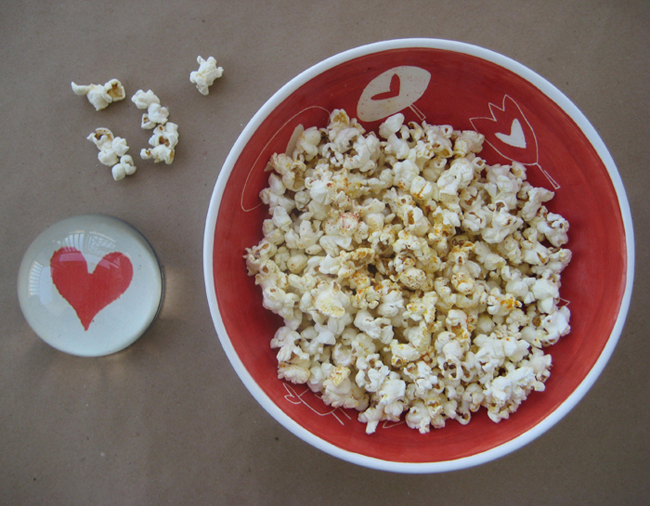 Anyway, I made this Persianized saffron butter pop corn for company at some point. And these were their reactions: “ummm, it tastes good!” one said, munching away. The other said: “mmm, this is good!” And yet another announced: “It’s kind of like ta’dig!”  Now, hold your horses, I wouldn’t go that far!
I also Instagrammed a teaser post about it, because let’s recite the first rule of life again: If you don’t Instagram it, it did not happen! And I got a few fun comments that I’ve got to share with you:

Marjan Kamali (author, professor, my friend) said: “I’m so excited about it. I bet it would be nice with tea.” And yes, I think it would be nice with tea! And with Together Tea! (You should totally read this book.)
Amanda Fatherazi (doll designer par excellence) suggested: “how about a #persianversion of caramel corn; add a coating of sohan asali for some extra crunch!” Which, my oh my, that is such a mouthwatering idea! But I’m afraid of making sohan assali as documented here!
My Persian Kitchen (another fellow Persian food blogging friend) said: “oohhh I love making homemade popcorn and persianizing it!!” Which reminds me, I have to ask Sanam how she Persianizes her pop corn.
Royal Montgomery summed it up brilliantly by quipping thusly: “Recipe: add popcorn to Hafez. Mix well. eat popcorn & read your fal.” Perfectly said!
Now before getting to the recipe, I hasten to add that the book of Persian poetry cavalierly used as food styling prop is not the Rubaiyyat of Hafiz, a book of poetry that Iranians use as an oracle of sorts to tell fortunes and make predictions. (It’s all in fun, not taken entirely seriously.) Rather it is a book of poetry by a poet named Baba Taher ‘eh Oryan, which literally means: The Naked Baba Taher.  Why did this 11th century Persian poet earn the monicker of “naked”? Did he really go around sans clothing? I know not. I do know that legend has it that he was a wandering dervish who spent much time in jungles and mountains. So maybe his clothes were thus quite tattered, leading people to think of him as naked? Perhaps. Fun fact: “Baba Taher poems are recited to the present day all over Iran accompanied with Sih-tar (three stringed viol or lute).”  (Read more at the source.)
And with that, we finally arrive at the recipe portion of our programming. What a long post for such a short, simple and basic recipe. I feel bad, like maybe you’re not getting your money’s worth!
But anyhow, finalement, the recipe: voila! 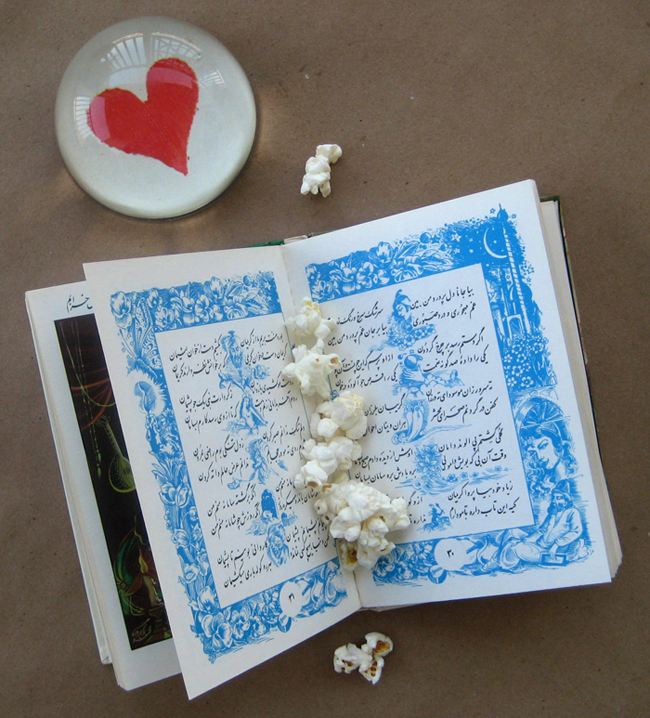 Edited to add Suzanne’s inspired idea of finishing off the whole thing with a dusting of sumac. Which sounds very good: it will add just a touch of tartness to the whole buttery saffron-y affair and I expect will be yum.

Put popped corn into large a bowl and sprinkle with coarse sea salt to taste.
Melt butter. Dissolve saffron in 2 tablespoons of hot water. Add to melted butter and stir to mix. Drizzle over popcorn and toss until well coated.
Enjoy! But don’t enjoy it too much. Exercise some self control. Please! 😉 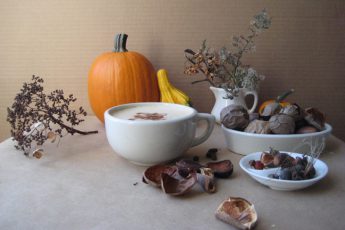 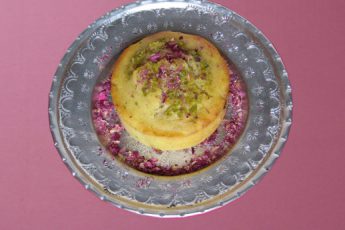