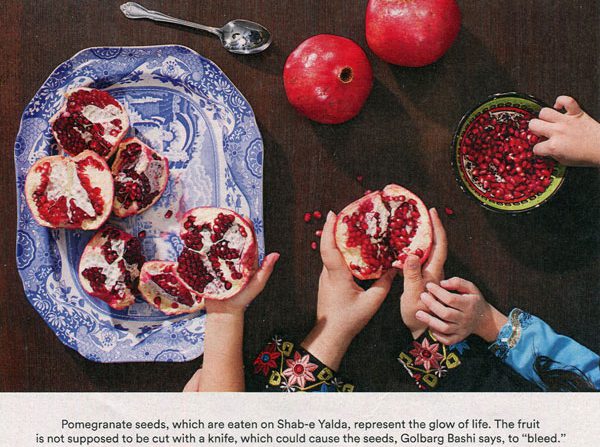 In this post about the Persian winter fete of Yalda, I thought it’d be fun to share some behind-the-scenes photos of the very recent time when I cooked up a batch of khoresh ‘eh fesenjan (using my mom’s awesome recipe) for a Shab-e-Yalda Persian celebration recipe that was featured in the article Diverse Holiday Feasts from Five New York Families in the New York Times.) Sometimes a blog is just a journal. A keepsake. And this event is certainly one that I want to keep for the sake of not just an amazing milestone for Fig & Quince, but the pleasure and fun of having shared it with an awesome family I am privileged to know and call friends. So I hope you’ll indulge me sharing some photos and tidbits and I hope you’ll enjoy it.

The long (there’s a pun here but you won’t know it till later, ha!) and the short of it is that the ancient Persians loved (and modern Iranians continue to love) to take any opportunity to make a ‘sofreh’ — an elaborate spread laden with edible yummies and symbolic objects that I like to dub by a highfalutin moniker of “tableau vivants” and also a less pompous nickname of “still lifes” —  and to make a big festive whoop out of greeting seasons with joyous celebrations.
There is Norooz: hello sweet young thing Spring! Mehregan: hello moody enigmatic Fall! And Yalda: why howdy dominatrix Winter! (Come on, don’t act shocked. You know that Winter whoops your you know what. And some of you like it.) What about summer, you ask? Well, Summer, bouncy lass as she might be, seems to have gotten the short end of the stick when it comes to ancient Persian celebrations. Which is fine. Summer is widely worshiped across the world (and it does a popular kid good to see what it feels like being excluded) while winter always gets the short shift and the cold shoulder.
But not in Iran! On the eve of the longest night of the year (winter solstice or shab ‘e Yalda in Farsi), Iranian families gather together and stay up long after dinner — munching on ajeel & seeded pomegranates sprinkled with golpar (ground angelica) and whiling the time away by catching up with each other, telling stories, and consulting the poetry of the Persian lyric poet Hafez for glimpses into the future – a type of bibliomancy that is called fal-e-Hafez. Knowing Iranians, if it’s possible to have music; there will also be music, and if there’s even the slightest chance to get up and shake one’s groove thing, there will also be dancing. (Providing ample opportunities for beshkan zadan.) 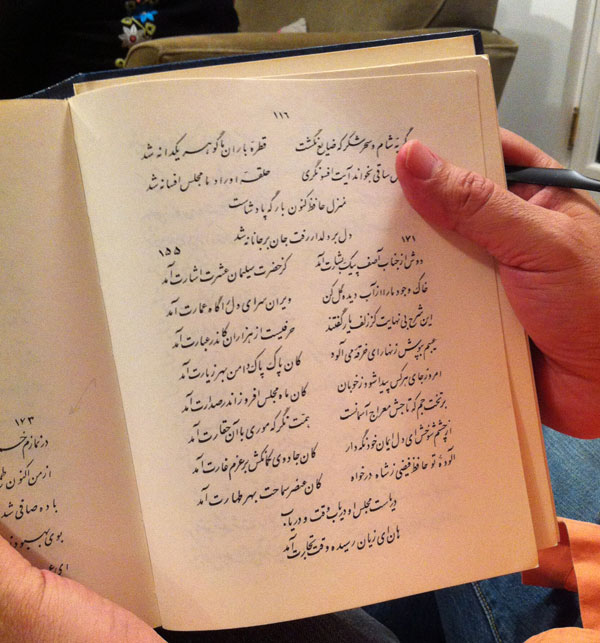 This ancient Persian tradition of greeting winter not with gritted teeth but by spreading a festive spread of pomegranates, ajeel, candles, flowers, sacred texts and books of poetry and engaging in story telling, dancing and poetic divination is the celebration called Yalda and after Norooz, it is the most widely observed national, secular festival in Iran. 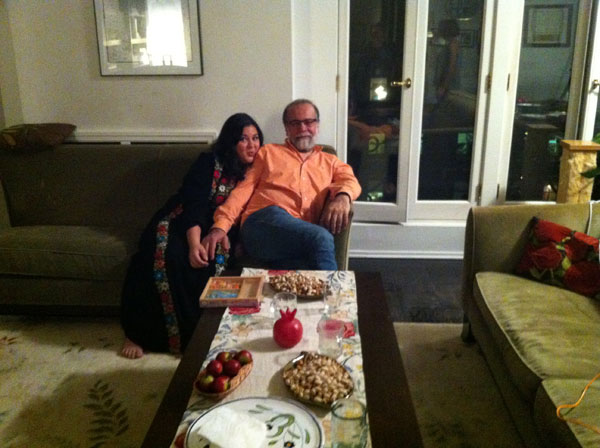 This year Yalda came a bit early for me! As I ended up celebrating it with the Doctor Golbarg Bashi and Professor Dabashi and cooking fesenjan for The New York Times!  Golbarg jan is an amazing woman and I admire her immensely. Among her many accomplishments, she’s an awesome mom, a professor, a cultural activist and role model, and she’s also the founder of Dr. Bashi Toys, multilingual educational toys. (That’d make great holiday gifts. Mmmkay?) And Hamid has an army of fans on Facebook, so I don’t need to tell you about him. “Never explain, never complain!” They both rock!
So this was all of us posing for the final scene near the tail end of the shoot. This was after the fesenjan was made and the pomegranate was seeded and both were shot and then we sat around the couch enjoying just your average ordinary traditional Persian Yalda after dinner time except that there were lights, camera, crew and ACTION!
Left to right: Professor Dabashi, and then there’s Golbarg jan, and then moi and the cute darling children: Chelgis and Golchin. There we were, sitting around, pretending not to care or know about the camera and crew, enjoying our mock Yalda! One of the reasons I look so goofy is that I was fake sipping my tea for the longest time. The only ones who were not hamming it up were Professor Dabashi who truly was engrossed in reading the poetry of Hafez, and Bashu, the adorable pishi cat, who was at the moment lounging entirely in earnest. He meant it! You do see the pishi cat, right? He is the sweetest feline and has the prettiest eyes! Here’s a better look: 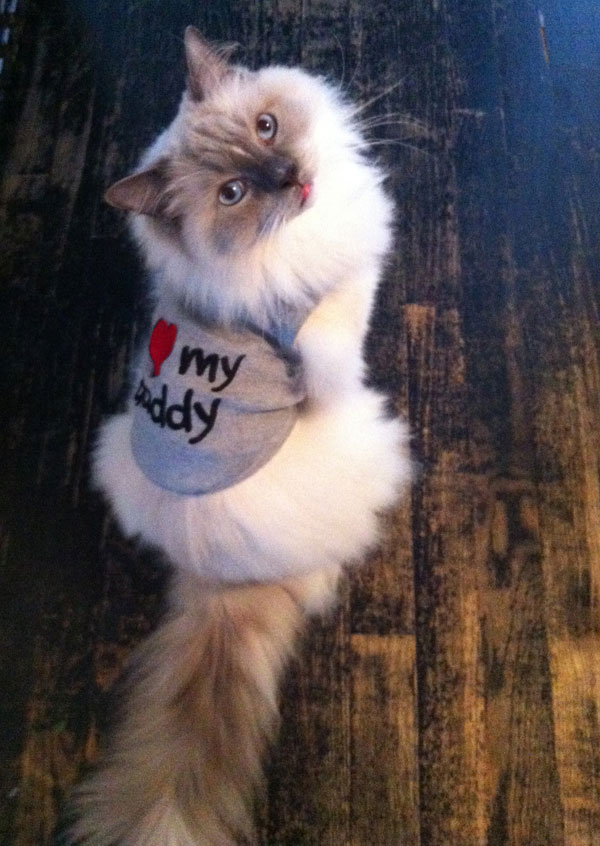 This pishi cat’s full name is: Bashu Bashi Dabashi! Isn’t that the most awesome name? Perfect name for a character in a children’s book story. But don’t even think of using it because Bashu knows his rights of publicity! 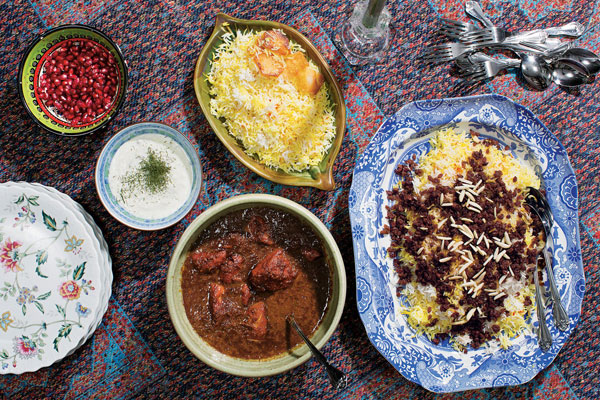 This image ended up as one of the main photos used in the article. Full disclosure: I only made the fesenjan so that’s all I can take credit for in this spread of Persian bounty.
The beauty of this shot may be its simplicity but don’t go thinking that snapping this shot was a snap. Oh no! Hours were spent, people. Hours! 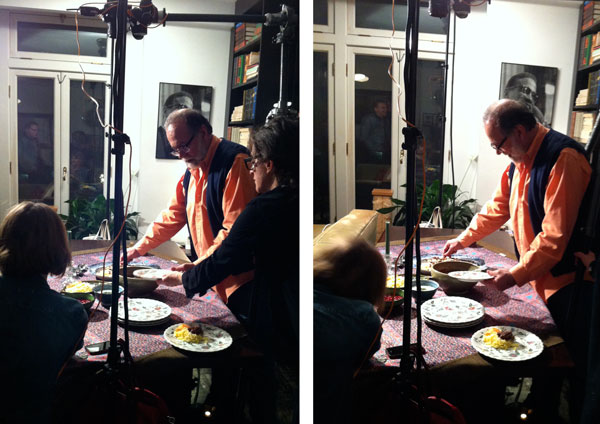 It took much time lighting, styling, and moving things a millimeter this way and that. All of us food bloggers totally relate! 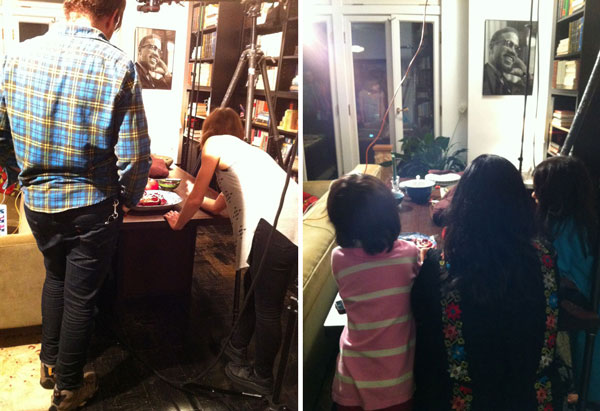 Same amount of preparation went into taking a plate of quartered pomegranates and producing that gorgeous shot of the hands of Golbarg and children holding the pomegranate pieces that starts this post. (It’s my favorite shot!) The left panel shows the photographer (Hannah Whitaker who also shot that amazing What Kids Around the World Eat for Breakfast series) and her assistant working on the scene; and the panel to the right are Golbarg and Chelgis and Golchin posing expressively with their hands with the pomegranates.
The whole shoot, start to finish, took 6 hours. It started with action shots of us in the kitchen actually making the fesenjan (me) and zereshk polo (Professor Dabashi) and then styling and shooting the food and then taking the family scene with the yalda spread. It was kind of exhausting and exhillarating at the same time. I was somewhat nervous about cooking fesenjan for the New York Times. In Iran, there’s a joke when people are nervous about doing something that goes: “why are you making a fuss? have the reporters come?” (khabargozar omadeh?) And that day I kept joking to myself that yes, khabargozar (reporters) HAD come! And not just any reporters. I mean, it was THE New York Times! Thankfully, the crew could not have been any nicer or more gracious and I’m equally thankful to report that maman’s awesome recipe did its usual reliable magic and the color and texture and taste of the fesenjan was pretty awesome. 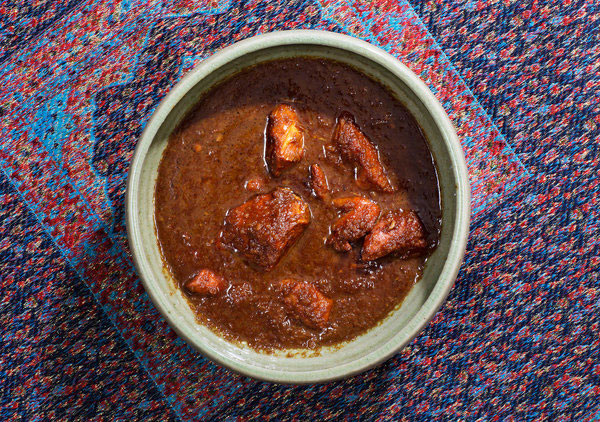 Everyone loved it. There were comments about its gorgeous lacquer and a couple of people said: “I could eat this every day!” (You can find the fesenjan aka fesenjoon recipe either as originally posted on Fig & Quince “Persian Pomegranate and Walnut Stew“, or as was published by the NYTimes.)

@figandquince Your fesenjan was insanely delicious. What a pleasure cooking with you.

Retorting to my age old adage that if you did not tweet or Instagram it, it did not happen, to wit, Exhibit A! Sorry! Had to share! I know it’s more decorous to be humble but I can not help but gleam and gloat about this! Humor me? 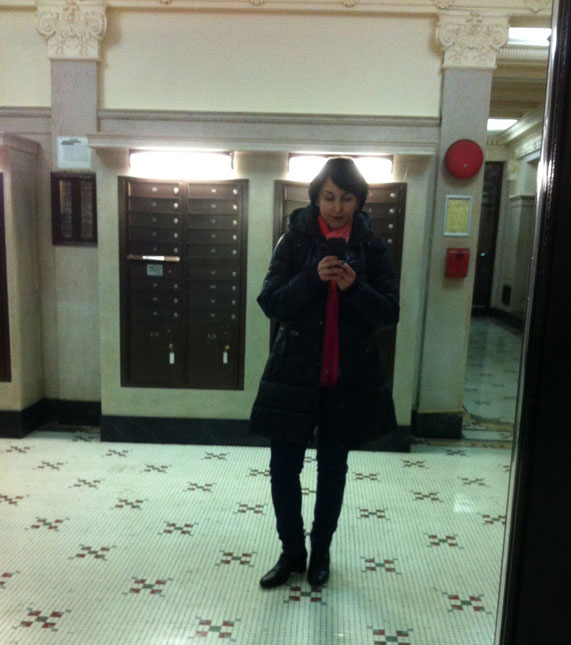 That day started with me frantically prepping (with some emergency kitchen tool assistance provided by Susanne and Trish, both lovely neighbors) and it officially ended with me taking a selfie in the lobby of the building as a souvenir. Well, in reality it ended with me taking a LONG subway trip back into Brooklyn but you don’t want to hear about the C train, now do you? Thought not! Although I have tales to tell on that front!
And that was my pretend Yalda! And it was awesome. And memorable. May you spend the longest night of the year with those you love the best who love you the most back and may you have plenty of yummy things to eat and may Hafez divine a glowing future for you in the most poetic possible way. And may you spend some of that long night reading the other Persian food bloggers’ posts about Yalda. #PFBshabehyalda 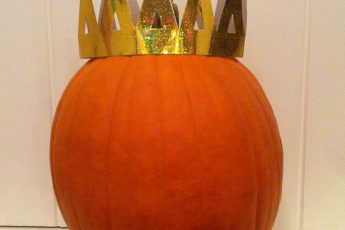 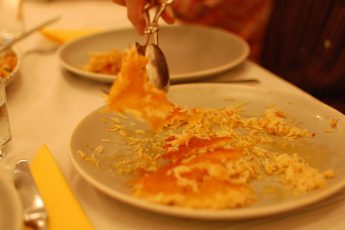